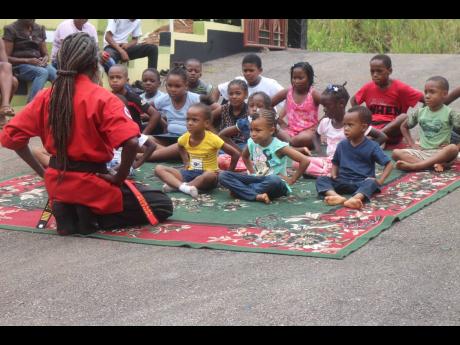 Tamara Bailey
Shihan Harriot with a group of children in Manchester recently during a meditation session.

Through martial arts, Shihan Conroy Harriot has changed the lives of hundreds of children with whom he has come in contact. He enforces his responsibility as a guiding force in their lives not just as teacher, but also as a father.

“I have been practising martial arts for over 42 years, and I have been teaching it for over 30 years,” he began.

Harriot, who was once a member of the Jamaica Defence Force, said that he began to develop the mental capacity to handle this art while at the organisation and that it was further shaped when he took on the lifestyle of Rastafarianism.

“Unlike police, who even when off duty have their guns, as soldiers, we were without weapons when off duty. I said to myself that I am out there in big, bad Kingston, I need to be able to defend myself.”

He said it was then that he realised that he had his mind and body and that they could become weapons.

“I got my black belt before I left the army, then I went to America, continued my training there, and got my degree. I am the founder of the Lion Paw Martial School currently located on the grounds of Glenmuir High (School).”

He said a lot of people misinterpret what martial arts is and use what it teaches for the wrong reasons.

“It is the development of mind, body and spirit. It teaches you to fight and not to fight. You don’t fight unless it’s self-defence or you are defending another to save their life. It is not to be used to showboat or for criminality.”

He said that when parents return and reveal the impact martial arts has had on their children, it motivates him to continue.

“Many of them think of me as their grandfather. You have some real moments with these children, and their innocence really makes you smile. I enjoy doing what I do. This is my passion, and my wife, Audrey, will tell you this too. It’s a family affair; I teach, and she takes care of the babies and the administrative work.”

His wife chimed in with her wish for every man to do martial arts.

Harriot ended, “His Imperial Majesty teaches us that discipline of the mind is the basic ingredient of genuine morality. It always starts with a disciplined mind. The society is so undisciplined, and we need to just take the time to take time.”