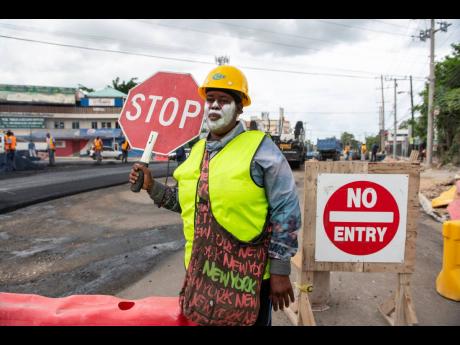 Arguing that current road-improvement work is testament that the ruling Jamaica Labour Party (JLP) is better at managing the country’s affairs, government Senator Matthew Samuda has rebutted recent suggestions by the Opposition that the projects are primarily focused in urban areas.

Samuda was responding to claims by People’s National Party (PNP) presidential hopeful Peter Bunting, who, at a Gleaner Editors’ Forum last month, said the electorate would not be swayed by several multibillion-dollar road-improvement projects currently being undertaken.

“The roadwork and investments being made in Jamaican infrastructure will yield benefit to the country and its citizens, and not to a specific political party,” said Samuda, listing efficiency, shorter travel times and reduced fuel costs among benefits to be reaped from the projects.

“On the back of that yield to the people of Jamaica, we expect that it will be viewed positively by the populace and will contribute to the continued view that the JLP administration is managing the country’s affairs well,” continued Samuda.

Samuda, the head of the JLP’s Public Relations Committee, pointed to the Ferris to Mackfield project in Westmoreland; Junction, St Mary; and the Southern Coastal Highway Improvement Project to run from Harbour View in St Andrew to Portland via St Thomas as examples of roadworks being undertaken outside of the Corporate Area. In addition, he referenced the more than $800 million being spent on farm roads across the island.

“[This] rubbishes the position taken by Bunting. A full list of NWA (National Works Agency) works … also clearly shows that the work is evenly spread,” Samuda said, adding that additional work was being done by municipal corporations.

Police Commissioner Antony Anderson had also told The Gleaner that work on the Government’s four Legacy road projects in the Corporate Area has caused “the most difficult time in terms of traffic management in our history”.

The projects – Mandela Highway, Hagley Park Road/Three Miles, Constant Spring Road, and Barbican Road – according to the National Works Agency (NWA) are slated to be completed by the end of summer. But the projects have been dogged with compensation issues, as business and taxi operators reel from losses to their viability.

Bunting told The Gleaner that the handling of such issues could prove negative for the current administration whenever the next general election is called.

“A lot of that construction, the only benefit the local economy is getting is a few flagmen and truck drivers, because it is happening in a very closed, enclave-type environment, where all the engineers, all the equipment and things come from just a few people,” Bunting argued.

“There are no linkages back to into the local economy. In fact, it is hurting the local businesses,” added the Manchester Central member of parliament, who cited several examples of road-construction works that had not proven beneficial to the PNP in the past.