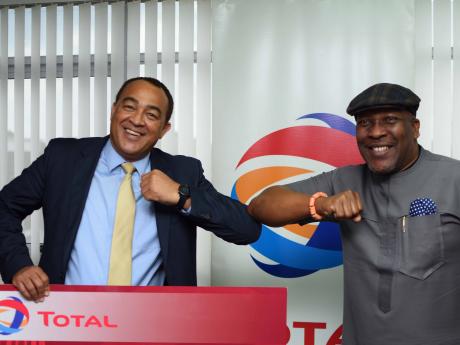 HEALTH MINISTER Dr Christopher Tufton yesterday confirmed approximately 20 samples for COVID-19 were collected on Monday via a mobile unit in quarantined Corn Piece, Clarendon, where at least six positive tests had originated after Jamaica’s first death from the virus was recorded in the area.

Speaking at a handover of gas cards worth $1m by local petroleum marketing company on Tuesday, Total Jamaica Limited, to aid in the national fight against COVID-19, Tufton said the unit was still in the field and marks a gradual deployment of four other units. IN PHOTO: Dr Christopher Tufton, minister of health and wellness, in discussion with Mitchelle Maylor-Archat, coordinator of medical technologists, against the backdrop of mobile testing units that will be engaged in fighting the outbreak of the novel coronavirus.

“We have four other units, so over this week, you will see additional units going out in different parts of the country,” he said of the Ministry of Health & Wellness’ push to reach other areas where residents, especially operating under curfew restrictions, may find it difficult to travel should they believe they are showing symptoms of the virus, which has so far killed four persons and infected 105.

The Alorica call centre located in Portmore’s Informatics Park has recorded 33 positive tests, 31 in the last 24 hours, and yesterday shuttered its second location at the newly constructed Stanley Motta-owned 58 HWT Tech Park in St Andrew over concerns about commingling of employees.

Tufton stressed the importance of Total Jamaica’s assisting with fuel via its vast network of stations across the island.

Total Jamaica’s Managing Director and CEO Chris Okonmah said that his company was impressed by the Government’s attempt to containing the spread of the virus and reckoned that its network of more than 70 stations could play a part in the national resistance.

The health minister, meanwhile, said that he was confident of the mobile units’ capacity, explaining that there was no restriction on test kits but rather a matter of how many samples can be taken on a given day.

“It’s not restricted by the number of test kits. We have probably the equivalent of 20,000 or more kits to collect samples,” Tufton said.

“The units collect samples, then they are taken to the lab for testing, so it’s more restricted by the hours in the day and the number of persons we can actually collect samples from during the day.”