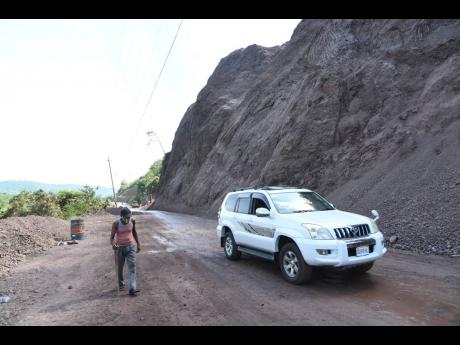 Rudolph Brown/Photographer
An elderly man walks by as a vehicle passes through a section of the unfinished Broadgate road project in St Mary last Friday. The project will miss today’s completion deadline after missing a previous target a year ago. 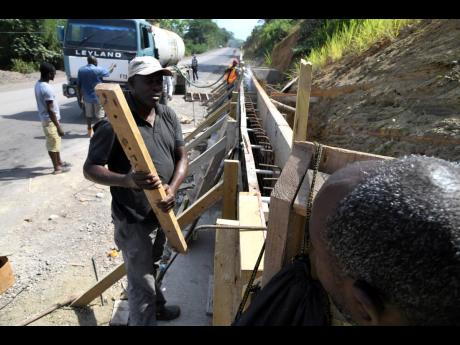 Rudolph Brown/Photographer
Workmen were busy constructing this retaining wall in the Broadgate area last Friday. There are a number of retaining walls left to be completed with some yet to be started. 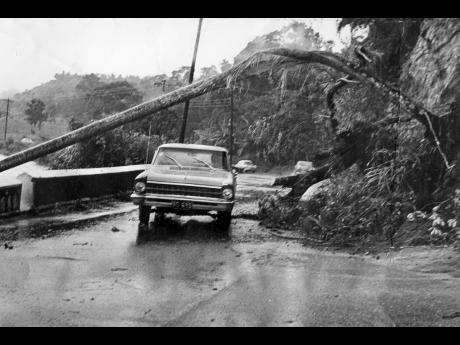 Gleaner Archives
The Junction road in St Mary has been affected by landslide for decades. In this 1969 Gleaner photo, a passing vehicle crawls through floodwaters while overhead is a burning tree stretching across the road. Although it was raining heavily the tree, which was struck by lightning, was still smouldering.
1
2
3

Ongoing works to rehabilitate the Broadgate section of the Junction main road in St Mary have been irritating many residents, who are yearning for the project to be wrapped up, giving them a reprieve from the dust nuisance and dynamite blasts constantly terrorising them.

“Dust is going to kill everybody down here,” a resident lamented to a Sunday Gleaner team two weeks ago.

“Every colour clothes you put on the line come back brown, caked with dirt,” he continued. “They supposed to wet the road early in the morning to keep down the dust, but it only happen when people complain. Trust me, is a major headache for everybody down here.”

The billion-dollar road project – which has seen widening in some sections, embankments constructed, and paving done – is a year behind schedule, having doubled the original projected cost, with today being the latest deadline for completion.

On Friday, National Works Agency CEO E.G. Hunter admitted that the project would miss the deadline yet again as the stabilisation work would not be completed on time.

“The safety of the residents and travelling public is paramount. Once the stabilisation work is completed, then the paving of about 300 metres on the roadway can be done, and it won’t happen by Sunday,” he said. “So we are almost there. Another two weeks at most, but definitely by end of June.”

On Friday, when The Sunday Gleaner made a second visit to the area in two weeks, heavy-duty equipment were still working on the hillsides. A standard 3.5ft- to 4ft-high retaining wall is a feature of the rehabilitation works, but in some sections, the hillsides overhang the road, corroborating the residents’ fear that the surface is better but the threat of slippage is just as dangerous as pre-improvement.

Two sections in the middle of the development were to be paved as there was a three- to four-inch difference in height between the paved and unpaved areas.

Despite the works, the residents say the dust nuisance has been irritating and sometimes it was hard to tell the difference between the shrubbery, trees, and people as a sheet of dust blanketed sections of the community.

At times, everything looked the same, except when the breeze blows and people turn their face away from the wind as it raises dust from the road before baptising the community in another wave of misery. The branches of the trees also join in the torment, depositing more woes on the hapless residents.

Motorists are not spared the headache as the roadway is closed daily between 9 a.m. and 3 p.m. at the Toms River bridge to allow for works to progress.

As The Sunday Gleaner observed the happenings two weeks ago, unsuspecting motorists, lured by the completed sections, honked their horns in frustration, hoping to be allowed passage to continue their journey. The warden came under constant abuse when she informed them that they would have to take the alternative 10-mile route through communities such as Richmond, Comfort Valley, and Scotts Hall.

When residents spotted the Sunday Gleaner team, which fell victim to the lack of proper signage or warnings and the warden’s nonchalance, they began venting their frustration.

“You see when they start to blast, the stones start flying all over the place. My house is about 300 metres from where them blasting now, and stones drop in the backyard. Sometimes it feels like somebody throwing stones in the yard. Every day is just the same big headache,” a frustrated resident said as others joined in, saying that their councillor and member of parliament (MP) have not been hearing their cries.

South East St Mary MP Dr Norman Dunn, who flipped the seat from the People’s National Party to the ruling Jamaica Labour Party in the October 2017 by-election following the death of Dr Winston Green, admitted that the road works have been “inconveniencing”.

“But I must tell you that 70 per cent of the persons working on the project come from Broadgate, so there has to be a balance,” he told The Sunday Gleaner, suggesting that they should not complain because they were employed to the project.

Dr Shane Alexis, the PNP’s standard-bearer for the constituency, said: “We know that this is for the greater good when it is completed, but it has proven to be an annoyance to the residents and those using the roadways alike. I have written letters to the media highlighting the environmental and health situation and how it was affecting the residents, but as they tell you themselves, the situation continues.”

The Government had budgeted $19.2 million in the 2014-2015 Estimates of Expenditure for the works, which would have seen the widening of the road from Toms River to Broadgate, and it was anticipated that 12 parcels of land would be acquired along the way. The Estimates reflected that the loan agreement was signed, design consultancy services procured, designs completed, supervision consultant pre-selected, surveys for land acquisition undertaken, negotiations commenced for land acquisition, and bid documents prepared.

In 2017, Prime Minister Andrew Holness announced a major road-improvement project, which swallowed the existing programme. The work was part of promised development during the by-election campaign leading up to Dunn’s victory.

The new project was priced at $598 million, but with the works a year behind schedule, the figure has now doubled, with an additional $520 million allocated to it.

All that is further annoyance to the residents of the area, who charge that the new works have done nothing to stop the long history of flooding and mudslides in the area, lamenting that the project was not supposed to run an entire election cycle.

Dunn agreed but said that there have been problems along the way.

In February, the National Works Agency said that work was being done to complete the removal of an embankment hanging over the roadway.

While residents say the road surface is significantly improved, they expressed fear that the shale hillsides, which have been very unstable for decades, could now be more unsafe than ever before.