Far too easy to launder money in real estate, vehicles, admits Clarke - Finance minister says Ja will remain on EU blacklist until more businesses, professionals open up on their dealings 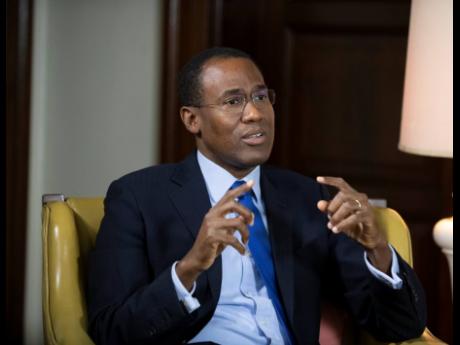 Finance Minister Dr Nigel Clarke is saying that the country will remain on the European Union financial blacklist if non-financial businesses and professions do not provide data on their dealings.

The finance minister explained to The Sunday Gleaner how an arbitrary shift in how the Financial Action Task Force (FATF) measures the size of financial assets in a country has affected Jamaica’s standing.

“If a country has strategic AML/CFT (anti-money laundering/combating the financing of terrorism) deficiencies, as many do, and its financial assets are deemed to be smaller than the threshold of US$5 billion, then its AML/CFT reforms are monitored by its regional AML/CFT body. In the case of Jamaica, that would be Caribbean Financial Action Task Force. Until recently, this has been the case for Jamaica up to the end of 2019, as our financial assets were deemed to be less than US$5 billion.

“If, however, a country has the same strategic AML/CFT deficiencies, and its financial assets are instead deemed to be larger than the threshold of US$5 billion, the country’s financial sector is seen as large enough, in an international context, to warrant the direct, enhanced monitoring of the international body FATF – a process commonly known as grey-listing.

“Now, a critical factor in Jamaica’s FATF listing is that FATF suddenly changed the variable used to measure the size of financial assets from M2 to M3, which is a broader measure that yields higher values, without a corresponding increase in the US$5 billion nominal threshold, and this consequential change happened a mere six months before the assessment date,” the minister explained.

Clarke said Jamaica, like other developing countries, has real and serious capacity constraints and very limited technical resources that have to be deployed strategically to address our many challenges.

“What you find is that it is the same set of individuals in our key public-sector institutions who work on key issues, and so a country like Jamaica has to delicately allocate these resources according to the outcomes being pursued.

That is the effect, the minister said, of what FATF did in February 2019 by changing the national financial asset size measurement with an assessment date of October 2019.

“It had an unjust effect on Jamaica,” he insisted.

Clarke explained some of the challenges facing Jamaica, pointing specifically to the non-financial businesses, adding that there has been very limited activity in the area of AML/CFT supervision of these professions and entities.

“The non-financial businesses and professions, which represent an outer fence, are riddled with strategic weaknesses. It’s far too easy for those with ill-gotten gains to transact in real estate, acquire cars and jewellery, participate in gaming, and channel funds through unregulated moneylending institutions without any alarms being triggered,” he told The Sunday Gleaner.

Continuing, he added: “The biggest challenge is getting the citizen, the business, the professional to understand why some of the measures required to address these weaknesses – which seem inconvenient, costly and intrusive at first – are for our own collective good.

“It is also important to understand the legitimate concern of trading partners as, without appropriate filters, strategic weaknesses in the AML/CFT/PF framework of a country can be leveraged by malevolent actors to eventually enter and access the financial system of a trading partner,” the minister reasoned.

However, Clarke said the passage several pieces of legalisation has improved Jamaica’s compliance with FATF recommendations.

“However, building an effective AML/CFT regime is not merely about passing laws. It’s about using those laws,” he said.

Jamaica completed its national risk assessment (NRA) in 2016. However, in reviewing Jamaica’s progress in October 2019, FATF indicated that the NRA did not include sufficient data from the non-profit sector and from non-financial businesses and professions.

“We, therefore, have to do it again. More important, we must keep the NRA up to date so that we can know if and when the AML/CFT risks in the country are changing, so that we can have a strategic response. This requires ongoing provision of data from non-financial businesses and professions. I would like to stress here that if we do not get this data from non-financial businesses and professions and include it in our national risk assessment, Jamaica will not be removed from the FATF list,” said Clarke.

Jamaica updated its Companies Act in 2017, as was required, to make mandatory, annual disclosure of beneficial ownership for shareholding of 50 per cent or more in a company. FATF’s view was that this should be a lower threshold, like 20 per cent, which is seen as an international standard.

“This information must be accurate and up to date with sanctions for non-compliance. So even though FATF recognised beneficial ownership improvements, for example, with respect to life insurance contracts, there is more that needs to be done,” the finance minister stated.

“We need to build greater public awareness and understanding of why this is important, how they can help improve the effectiveness of our AML/CFT regime and the grave domestic and international consequences of not doing so. It’s hard for the lawyers or accountants or car dealers or other professionals practising in the proverbial hills of Clarendon, who never do work with an international dimension, to understand why they should be having clients fill out intrusive and complicated forms, and furthermore, why they should be required to make submissions on suspicious transactions,” argued the finance minister.