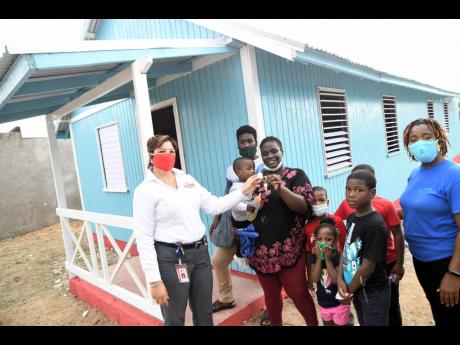 Crystal Clarke was emotional yesterday as she was presented with a four-bedroom home in Portmore Villa, St Catherine, describing it as a birthday gift and a lifetime dream.

The household worker and mother of eight, whose challenges providing for her family were first highlighted in a TVJ Prime Time News feature in April, was one of two persons gifted with new homes by the National Baking Company Foundation (NBCF) in partnership with Food For the Poor and the Housing Agency of Jamaica (HAJ) yesterday.

“I’m still taking everything in, but it’s a joy to actually have my own home, and it’s beautiful. Words can’t even explain it,” a smiling Clarke said. “It’s wonderful now that I don’t have to hear somebody tell me to come out or that I should leave their place. It’s awesome!”

Revealing that she was previously renting a one-room space for $8,000 in Duhaney Park, St Andrew, which she shared with her children, she said that the family welcomes the change.

“I asked them (Food For the Poor) that seeing that we have a family of nine, for them to do something that is untraditional, which is for them to provide a bigger housing unit, and so they did that,” she said.

“It is awesome! Everybody loves it, and they finally can have their own rooms. It is a joy! It is wonderful!” the overwhelmed 34-year-old said.

Nakia McMorris, HAJ senior manager for community development, said that the lands for the houses were provided at a significantly reduced cost and the titles would soon be provided to the families.

Forty-six-year-old Marvette Johnson, the second homeowner, was diagnosed with breast cancer in 2009, and after years of being cancer free, the illness returned in 2016.

Severe lymphedema and chemotherapy treatments have rendered her unable to work.

Johnson told The Gleaner that she had to be moving from house to house with her two children, relying on the charity of family and friends.

“I was saying, all I needed was a little piece of land, and to ask Food For The Poor for a house, and if I could get that, that would mean the world to me,” Johnson recalled.

She likened her emotions to the birth of her children after seven miscarriages.

“I didn’t know that I would be able to be a homeowner, much more a landowner, and to have that, it gives a fulfilling joy,” she said.

“Nobody will be telling me, ‘You have to leave’. I won’t have to move from here. This is my home, my comfort zone. This is mine, and I owe it all to God,” said Johnson.

NBCF Executive Director Christine Scott-Brown said that $4.5 million was donated to cover the cost of 10 houses, which is 10 per cent of Food For The Poor’s annual target.

“Today, we have handed over actually three houses. Although it looks like one house, it’s two in one,” she said, adding that the remaining homes would be located wherever the land is provided.