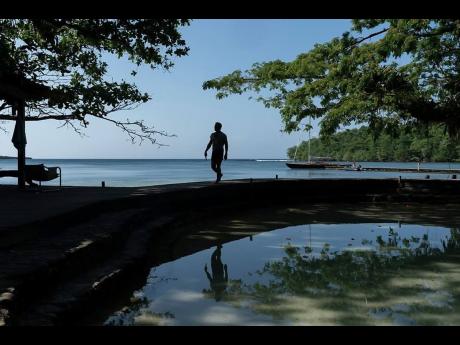 Fans of 007 got a delightful treat on Wednesday when the official Instagram account of the latest Bond flick, No Time To Die, shared two fabulous photos from their filming in Jamaica. The shots, drenched in tranquillity, show off the scenic beauty of the island paradise. In the first picture, a silhouette-like figure, Bond, is seen taking a solitary twilight stroll along a strip, with his sharp reflection upside down in the water below. The second picture shows the famous spy, with his back turned, as he contemplates a vast expanse of calm water from the patio of his rustic villa.

The teasers, which are captioned, “ No Time To Die sees James Bond return to Jamaica. It’s the third time the country has been used as a location as parts of Dr No and Live and Let Die were also filmed there” have had the desired effect. Fans are swooning over the stunning scenery and begging for the movie to be released. “Charge a premium and release it on demand, we can’t take the delay,” one follower demanded.

There was some good news earlier this week, via a tweet from the producers, that the movie will be released five days earlier than expected in the United States. The new date is now November 20 in the US. The UK premiere holds its November 12 date.

Months of speculation came to an end on April 25 last year when it was confirmed that the 25th film in the franchise would be shot in two locations in Jamaica – Portland and Kingston – as well as in Italy, Norway and London. Bond films, which are usually announced in England, diverted from tradition when what was then codenamed ‘Bond 25’ had its official livestreamed launch from GoldenEye Resort, Jamaica. Cast and crew, including Daniel Craig, director Cary Joji Fukunaga and Lea Seydoux, Ana de Armas, Naomie Harris and Lashana Lynch flew in to Oracabessa, setting up digs at the same villa where British author and James Bond creator, Ian Fleming, wrote all 13 Bond novels.

No Time To Die finds Bond out of active service and enjoying a tranquil life in Jamaica, which, according to executive producer Barbara Broccoli, is Bond’s spiritual home, because he started his journey there. The film’s synopsis states, “Recruited to rescue a kidnapped scientist, globet-rotting spy James Bond finds himself hot on the trail of a mysterious villain, who’s armed with a dangerous new technology.” The long-awaited flick had an original release date of April 3, 2020 in the UK and April 8 in the US, but the COVID-19 pandemic has seen it pushed back to November.

Daniel Craig, who first reprised the role of the iconic British spy James Bond in 2006’s Casino Royale, bows out in No Time to Die. A replacement for the 52-year-old actor is still being contemplated, with some suggesting that the time has come for a black James Bond. The last Bond movie, Spectre, came to theatres in 2015, when it made more than $880 million in ticket sales worldwide.

The first-ever Bond film, Dr No (1962), shot a chunk of the story in Jamaica, close to Fleming’s GoldenEye estate. With Roger Moore as James Bond, the production returned to the island in 1973 for Live and Let Die, in which Jamaica also starred as the fictional Caribbean nation of San Monique.