After 20 years of sewage, man says he can’t bear the stink 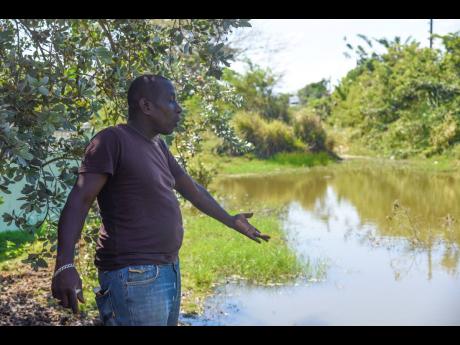 Nicholas Nunes/Photographer
Steven Bryan cries for help as sewage takes up a section inside and outside of his yard. Bryan said that the sewage not only gives off a foul smell, but is affecting his rent business.

A resident of Beach Road in Prospect, St Thomas, Steve Bryan, is at his wits’ end as a 20-year-old sewage problem which directly impacts his home continues to wreak havoc in his life.

The waste is reportedly being released from the Prospect Sewage Plant which serves hundreds of homes in a housing scheme in the area.

The St Thomas Public Health Department has served the National Water Commission (NWC) several notices, and has even taken the agency to court to answer to the claim in 2017. However, the matter was later withdrawn.

Despite its dismissal from court and repeated warnings, the health department shared in a recent report that pooling of effluent on Beach Drive from the NWC’s sewage treatment continues to be an issue.

The small pond formed at the gate of Steve Bryan’s home bore evidence of the unsolved concern.

“Soon fix. That’s all I’ve been hearing. I’ve called on every authority to come and look at this … been on the TV so many times. I’ve called on the past member of parliament a number of times, even while he was minister of health, and still nothing. Maybe now that we have a new MP she can help.

“The health people tried and don’t reach anywhere. Water Commission, we are calling on you again to come and rectify this situation that I’m suffering with. I’m fed up, I don’t know who else to go to. Everybody know mi already because I’ve been bawling for this for the past 20 years,” said an obviously annoyed man.

Bryan told The Gleaner that he has lost almost everything he owns to this unfortunate situation.

“I have a little guest house at the back but because of the stench from the water, nobody wants to come here, and they complain that crocodile is always here, which is true because I see them at my gate many times, so that business mash up.

“Because the water blocking the road, it sends everybody on to walk on beachside around the back. So everything I have around there gone, including jelly, banana, plantain. Everybody walk there and see your things dem, pick and gone with it,” he said, adding that the stench could also be the reason behind his ill-health condition.

The yard, which was full of dirt heaps, mud and tractor trails, testified to Bryan’s claim of having to continuously buy and dump truckloads of sand to prevent the filthy water from completely flooding his space.