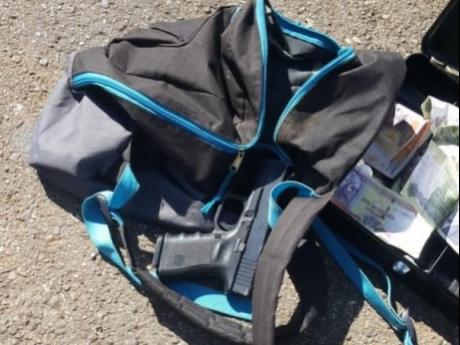 A bag containing cash that was recovered from an alleged robber shot dead by a licensed firearm holder in Maidstone, Manchester this morning (contributed).

One of two men who allegedly attempted to rob a gambling outlet in Maidstone, Manchester this morning was killed by a licensed firearm holder.

Head of the Manchester Police, Superintendent Gary Francis, confirmed the incident, which took place some time after 8:00 a.m.

He said the men were challenged by the licensed firearm holder as they tried to escape.

“One of them was shot and pronounced dead,” Francis confirmed, noting that all the details on the incident were not yet available.

The Gleaner understands that a firearm was recovered from the deceased man, and a stash of cash.

The other gunman escaped.

Francis said the Cottage Police, who responded to the incident, are investigating.