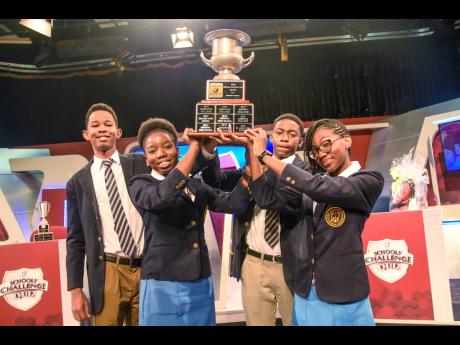 Nicholas Nunes/Photographer
From left: Kaif Bailey, Chaunté Blackwood, Dauntae Wright, and captain Kelsi Grant hold the TVJ Schools’ Challenge Quiz trophy. They defeated Wolmer’s High School for Boys in a match that went to the wires and had to be decided by a review by the judges. 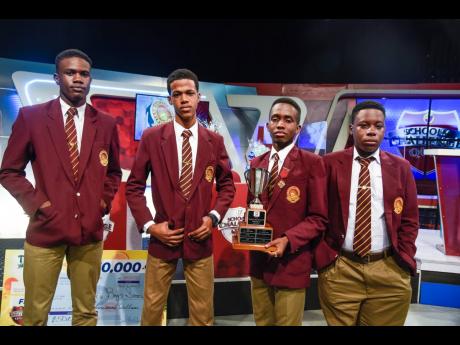 Ardenne High School became the first team in 15 years to defend its title in the TVJ Schools’ Challenge Quiz competition, after winning by the way of a review by the judges.

Kelsi Grant, Ardenne’s captain, said they were confident of victory despite the strong challenge by their rivals.

This Wolmer’s team also made history, as last Friday, it was the first time the school was making it to the final round in 38 years.

Zaire Pinto, the 19-year-old captain, said that it felt as if time was frozen as the judges deliberated over the scores after the buzzer section.

“The team looked sad. I think they knew something that I didn’t,” Pinto said, disclosing that some members were teary-eyed.

“When I heard the final results was when I came back to reality and my heart fell,” he said.

Grant said she was proud of her team’s performance.

“I was on a high, playing with my team for the last time, trying to be everything they need me to be because it’s a team effort,” she said. “I just knew we were winners, regardless of the outcome.”

Grant, who has been captain since 2019, explained that mindset was fundamental in keeping their composure, especially having made it to the finals after starting training late and having to utilise WhatsApp calls and Zoom for the team to convene and practise.

Head coach Danlee Wadsworth said at no point was he, or assistant coach Deidrie Wadsworth, worried because they stuck to strategy. He also said they were sure that the deliberations would have worked in their favour.

“They didn’t talk a lot about winning but about preparing,” said Nadine Molloy, principal of Ardenne High, who was excited at the win and pleased with how “dignified they were”.

Most students have missed out on extra-curricular activities, but Molloy noted that the school has done exceptionally well this academic year.

Ardenne won first place in the Scientific Research Council competition and excelled in the Math Olympiad.

Molloy is already fired up for next year’s quiz competition and so, too, is the Wolmer’s team.

“The nature of how the final score changed, it’s not an easy pill to swallow, but what can we do? It’s a part of the competition, somebody has to lose,” said Wolmer’s head coach Ke-Vaughn Mowatt, who has been with the team from 2011.

As head coach for two years, he said he was quite impressed with how the boys persevered despite having low moments.

Andre Stewart, the assistant coach, has been working with the team since 2016. He said this year’s was his most memorable experience.

“About three years ago, we lost in round one to Maggotty, and it’s basically the same team,” Stewart told T he Gleaner.

Though they laud the competition host for adapting to the pandemic last year mid-season and this year, Stewart is suggesting that there be better communication between the coaches and judges.