CMO: No risk at all from COVID vaccines labelled to expire tomorrow 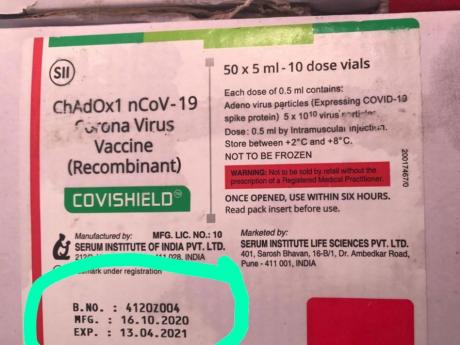 The batch of 75,000 doses of the AstraZeneca vaccines last week arrived in Jamaica as a gift through the African Medical Supplies Platform and the health ministry has been using an islandwide blitz in the push to administer as much as possible by tomorrow.

Jamaican health officials are seeking to calm anxiety about the AstraZeneca vaccines following the revelation that the current batch expires Tuesday.

The batch of 75,000 doses last week arrived in Jamaica as a gift through the African Medical Supplies Platform and the health ministry has been using an islandwide blitz in the push to administer as much as possible by tomorrow.

“There is no risk at all,” Chief Medical Officer (CMO) Dr Jacquiline Bisasor McKenzie told The Gleaner this morning.

She said, too, that the potency of the vaccine remains even after the shelf life ends.

So far, around 30,000 doses of the vaccines have been administered, said Bisasor McKenzie and the plan is to inoculate another 30,000 people by Tuesday.

This would surpass the initial target of 54,000 people.

But did the government do the necessary due diligence in acquiring the vaccine? In the meantime, Bisasor McKenzie said stability studies are continuing to determine if the shelf-life of the AztraZeneca vaccines may be extended from six months to nine months.

That would mean a new expiry date of mid-July for the current batch in Jamaica.

The CMO says the Health Ministry has received preliminary documentation indicating that the drug is stable, however, it is awaiting further documentation.

“We don’t want to wait on that because it would be prudent for us to use up before the six months and that is what we are trying to do,” she said.

According to her, when the government began the discussion to obtain the vaccines it was also considering the July 2021 expiry date, however, the vials arrived ahead of the labelled mid-April expiration date.