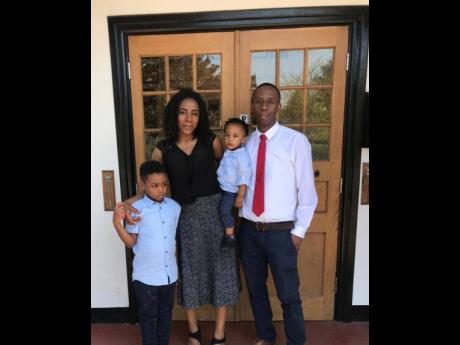 Contributed
Taneisha Pascoe-Matthews, her sons Jadon and Ethan (in hand), and husband Kerry. 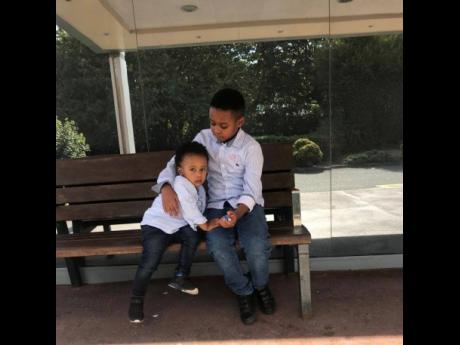 Contributed
Jadon (right) and Ethan Matthews were both diagnosed with autism spectrum disorder.
1
2

Taneisha Pascoe-Matthews says parenting a child with autism is like being a tour guide, someone who must translate the customs and language of the non-autistic world. But when you have two children with autism, like she does, the job is considerably more complicated. That’s because many siblings that are autistic fall along different parts of the spectrum, and her sons are no exception.

When Jadon, her first child, was born, the first year seemed typical to most newborns. He walked at 11 months and was constantly babbling. As the months went by, however, they noticed he would cry when they attended birthday parties or any gatherings with unfamiliar people and in a noisy environment.

They also noticed that he would line up his toys and would not leave the house without a water bottle. Jadon was also not making eye contact and was happy to play by himself. “We spoke to our doctor, who reassured us to give it time. He said he was not overly concerned at that time,” Pascoe-Matthews said.

However, when Jadon was 18 months old and was now not using words and not responding to his name, he was taken to a paediatrician and invited for an observation. The paediatrician also requested hearing and blood tests.

“The hearing test confirmed that he was hearing and should be able to respond to his name, but the blood test revealed a deletion on one of his chromosomes,” Pascoe-Matthews said.

“It was requested that my husband and I should have similar blood tests done. It came back that I had a similar deletion on one of my chromosomes. After a period of six months’ observations Jadon was diagnosed with autism, three months before turning three years old,” she added.

Initially, the main challenges for Jadon were communication and social interactions. He later developed difficulties with sensory processing issues. Pascoe-Matthews said it was difficult to watch in the early days before he started using different forms of communication, such as Picture Exchange System (PECS).

The Picture Exchange Communication System (PECS) is an augmentative and alternative communication system developed and produced by Pyramid Educational Consultants, Inc. PECS was developed in 1985 at the Delaware Autism Program by Dr Andy Bondy and Lori Frost.

“Ethan is now on Melatonin that helps him fall asleep, but he is still up multiple times. Ethan is non-verbal and now follows minimal instructions. He has multiple meltdowns daily as he struggles to express himself and deals with sensory needs. He is currently also using PECS,” Pascoe-Matthews said.

At home, Jadon likes playing with his toys, especially trains, even though he is not spending as much time with them as in his earlier years. He also enjoys baking, photography, reading short stories, playing electronic games, and watching videos on YouTube.

“For many years, the things that gave Jadon joy were his trains. They were a constant companion to him. [In] most of our photos outside the home, Jadon would have at least one train with him. He received a set of Chuggington interactive trains in 2018 and, coincidentally, he started speaking shortly after,” Pascoe-Matthews said.

“The book, The Biggest Surprise: Jadon and the Talking Train, was written by Pascoe-Matthews for her son. “This year, for World Book Day, where students can dress up as their favourite character from a book, Jadon went as himself. I am now at the idea stage for a book, with Ethan as the main character,” she said.

At school, both boys are supported by an Educational Health Care Plan (EHCP), which is a legal document that outlines their identified needs and provisions that need to be in place. Jadon is in a mainstream full-time programme and, as part of the ECHP, has a teaching assistant and regular support from a speech and occupational therapist.

“When Jadon was diagnosed, I asked many questions. One being, ‘Why us?’ But if we truly mean when we pray ‘thy will be done’, then the question is irrelevant,” Pascoe-Matthews said.

“However, I quickly got to work and found out lots about autism by joining many support groups on Facebook for autism and special-needs families. You can learn a lot from these groups, as family will share their experiences. Parents will need to be patient and remember, also, that what works for one might not work for another. There is not a formula for interventions,” she added.

“Based on my observation, I can tell that many family and friends are now aware. I would hope that they have moved on from the awareness phase and are now fully engaging in acceptance and inclusion,” she said.

She has also set up the following accounts for public awareness: One Of Many Autism Voices on Facebook, Spotlight on Autism on Instagram, and genuinely_jadon on Instagram. “I am allowing Jadon to tell part of his story using social media. I am conscious that I do not have permission, and, therefore, content are highly selective,” she said.

Pascoe-Matthews arrived in the United Kingdom in 2008 as a mathematics teacher. Her husband, Kerry, joined her shortly after.