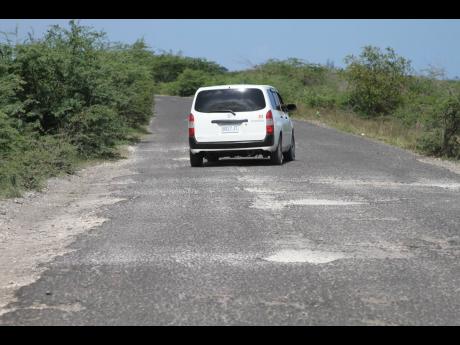 Nathaniel Stewart
A motor car navigates its way in between potholes along a stretch of roadway in south-west Clarendon. 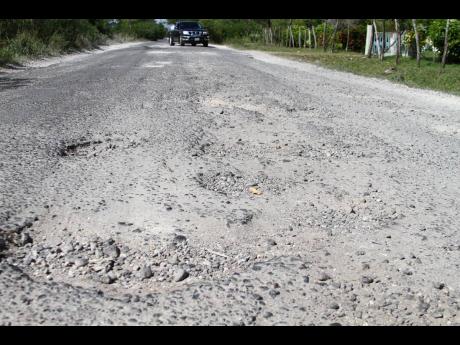 Nathaniel Stewart
A vehicles tries to negotiate potholes on a roadway in south-west Clarendon. 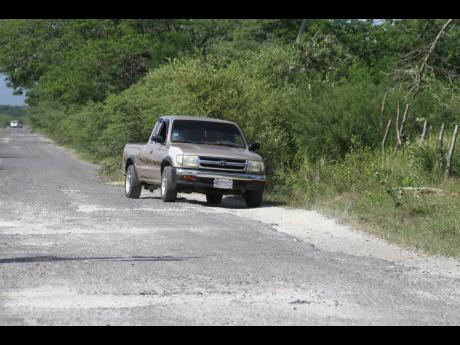 Jamaica Labour Party (JLP) caretaker for Clarendon South Western, Kent Gammon, has chided the People’s National Party (PNP) for over 30 years of neglect and poor representation in the PNP stronghold.

Gammon, in a press release, demanded that the member of parliament (MP) address the poor road situation in the constituency.

On Monday, May 3, motorists staged a demontration in Scotts Pass, protesting the conditions of the road. But according to Gammon, there are several roads across the constituency that are in a worse state. He said that some communities in Vere are among the worst affected.

When The Gleaner visited the area, residents lamented the conditions of the roads, citing lengthier driving and costly vehicle repairs.

Craig Taylor, who was spotted on the Gravel Ground to New Yarmouth leg of the road, told The Gleaner that the poor road conditions date back to over three decades.

“The road condition is very, very terrible, and right before elections we were promised a lot of good things by both [political] parties and nothing has happened so far. We can’t be driving on this,” he said.

The Vere area is known for large-scale sugar cane production.

Another resident, Avalyn Henry, believes too that trucks that haul tonnes of sugar cane in the area contribute to the worsening condition of the roads.

“[There are ] a lot of potholes and the cane trucks do more damage to it than the other vehicles. Most people who live [in] Kemps Hill side usually take this road, but it’s pretty bad,” she said. Henry, a principal, also spoke of the hassle to get to work in the mornings, and mounting costs to mend damage to her vehicle.

Ritson Barnes, a taxi operator who plies the Race Course to May Pen route, told The Gleaner that motorists have been dealt a raw deal over the years. He said promises to address the road woes have not been forthcoming.

“The road from Alley to Race Course in a bad condition. Every other week we have to change ball joint, rock end and tie-rod end. We a go through this over a long time and we only a get bare promise. The leg from Alley to Kemps Hill is the worst,” he said.

But MP for Clarendon South Western Lothan Cousins has indicated that plans are in the pipeline to address the concerns. He noted that several roads across the constituency have already undergone repairs.

“I’ve been MP for six months, and check the roads that have received attention already: Cherry Tree; Havana Heights - Three; Parnasuss to Crooks Gate; Race Course to Sedge Pond; [and] the Ashley Hall Housing Scheme,” he said, adding that a number of other roads were repaired.

He disclosed that roadworks are currently being done in Foga Road, Preddie in Milk River, as well as on the Milk River Bath to Farquhar Beach leg under the Tourism Enhancement Fund.

“Most of these works were done with my personal money. I put my personal resources and money into these projects, otherwise nothing would be done. All I get is pushback from the Government,” Cousins told The Gleaner.

According to the MP, the repair costs for the road in Havana Heights - Phase three totalled over $14 million. He said, however, that only $4 million was accumulated through the Constituency Development Fund.

“The constituency is flat in most areas, and is a basin for all the water from Manchester and upper Clarendon, so if the drainage infrastructure is not upgraded then the water will settle on the roads, leading to its deterioration. That’s why it is imperative that these roads be maintained by the Government,” he said.

Cousins, who asserted himself as a transformational representative, said several infrastructural development plans have been implemented to boost growth across the constituency.

“This is what transformation is about; improving on the spaces we have and making them more beautiful and functional for young and old,” said Cousins.