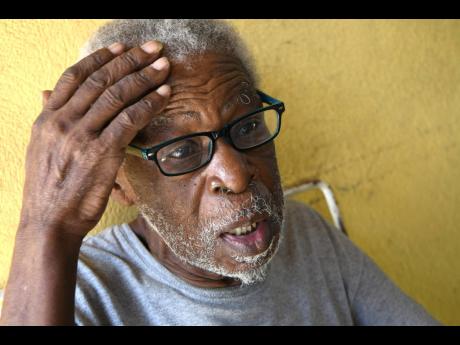 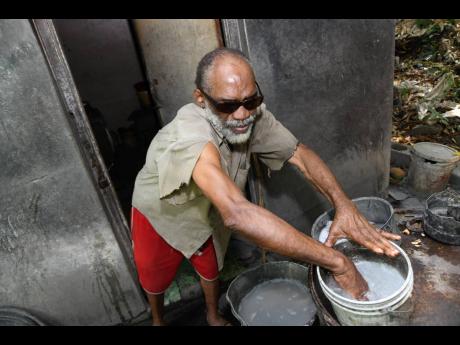 Rudolph Brown
Beresford Dixon washes his hands in a bucket outside his house in Kintyre, St Andrew, on Thursday. 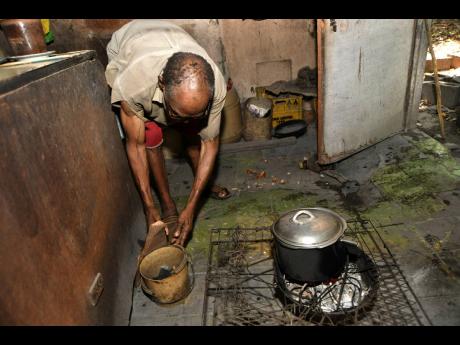 Rudolph Brown
Beresford Dixon attends to his pot on a wood fire at his home in Kintyre, St Andrew.
1
2
3

Beresford ‘Bwoizy’ Dixon cooked tasty meals for the staff at the Kingston Public Hospital for over 40 years before becoming visually impaired because of cataract.

Dixon, who also has diabetes, lost his sight in 2008 but continues to take care of himself. When The Gleaner visited him at St Josephs Road in the community of Kintyre, St Andrew, a tantalising scent greeted the team from the bottom of the road. Dixon was cooking rice and peas and veggie chunks on wood fire, in one pot, using coconut he grated himself.

“Mi find miself very versatile ... seeing or seeing not, me a help miself,” he said.

He hopes to be among his other brothers who were fortunate to have done corrective surgery, and not like his mother and twin sister who died before getting the medical attention they needed for their eyes.

“The left eye ready. I’m wishing for someone to come assist me to get this one fix because it is ready. True the COVID come in now, a months now, almost a year now, me nuh go down a Chest (hospital),” said the father of six.

In addition to the money needed to do the procedure, Dixon has been struggling with controlling his diabetes. Dixon has been chopping down the bush in his yard and planting crops such as cocoa around the place.

“The bredda weh you see say, boy me do it better than some people and me na see.” he shared. “Nuff things mi plant and reap, mi proud a miself.”

The 67-year-old said he wants his vision to return first before focusing on the work needed to be done on the house. The ceiling has imploded, and the floor is cracked in multiple places.

He expressed that losing his sight is not entirely devastating, and hopes others feel the same. He lives by a mantra he first heard from a politician, “Him said him eyes not seeing but the brains are in touch, and I give him 100 per cent clap for that.”

Vivienne Brown-Bond, a justice of the peace in the community, said she has been trying to get some help for ailing citizens, especially in the midst of the pandemic.

“When I come to bring him to the doctor, I have to go down the hill first, because he has to drag himself on his bottom to go down by the road,” she said, noting that a section of the track has broken away.

In the same community, Moral Cohen has also been struggling with his sight because of diabetes.

For five years the 77-year-old has been feeling around. After just two years of losing his sight, his partner of over 50 years died, leaving him to make life for himself.

“A don’t even get no jook weh dem a give people fi di corona, for me can’t manage pan mi own fi deal with it,” he told The Gleaner.

“Mi not even get the something, because me nuh have nobody fi help me fi get it, ‘’ said Cohen, who also has hypertension.

Despite his many needs, he expressed that he would be delighted with someone cleaning his house and cutting his toenails that have grown extremely long. He lauded a neighbour who has been assisting in getting his medication and cooking for him.

“Sometimes the house would a want fi sweep out inna di right way good,” he shared. “Mi used to try a thing and cut my nail. Mi nuh know if nobody can manage dem now, because mi nuh think the clip can manage fi go over the nail.