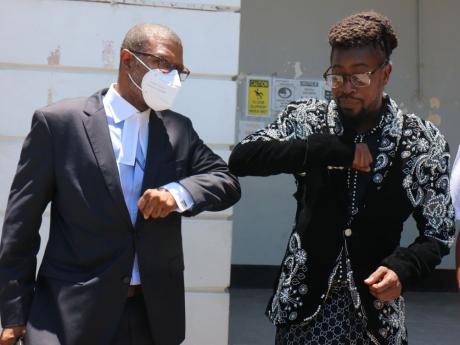 Dancehall entertainer Moses Davis, more popularly known as Beenie Man (right), with his attorney Roderick Gordon after the artiste was fined by the St Elizabeth Parish Court on May 17, 2021 - Ashley Anguin photo.

The fine was imposed when he appeared in the St Elizabeth Parish Court today.

The 47-year-old international dancehall star was charged by the Black River police last year December for hosting an illegal party at a location in Shrewsbury district, St Elizabeth, on Sunday, November 29, 2020.

He was arrested and charged for breaching the Disaster Risk Management Act and the Noise Abatement Act.

In April, he pleaded not guilty to breaching the Noise Abatement Act and that offence was dismissed.