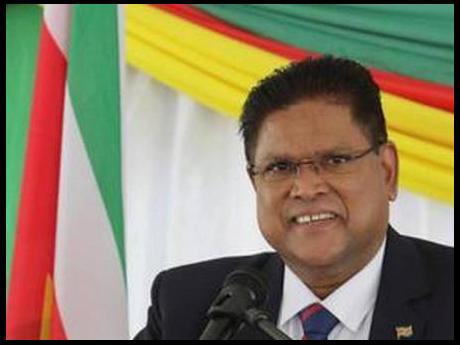 The Government of Suriname, yesterday, announced a total lockdown of the country for two and a half weeks, in an effort to stem the spread of COVID-19.

The announcement was made by President Chandrikapersad Santokhi, who said that his administration has promulgated Code Purple, the worst risk level for the pandemic, for the entire country; and Code Black for the situation in hospitals.

The total lockdown will start on Monday and end on until June 18.

The head of state, who painted a grim picture of the situation said that there's a shortage of oxygen, hospital beds, medical staff and health workers.

Since March last year, 282 people have died from the disease. May 2021 has been the deadliest month since the pandemic broke out, with 78 deaths.

On Monday, with the exception of essential services, all government offices will be closed and citizens are only allowed to leave home for emergencies, such as for medical reasons.

Restrictions to be tightened; stricter penalties

Santokhi said the enforcement of the measures will be tightened and those who violate the measures risk stiff fines and additional penalties.

The names of stores and shops that do not adhere to the COVID-19 regulations and measures will be made public, fined and closed for an extended period of time.

During the total lockdown, only supermarkets, bakeries, butchers, pharmacies and hardware stores are allowed to open on Mondays, Wednesdays and Fridays. In addition, only people 18 years and older will be allowed in stores, with no more than ten people at a time.

Meanwhile, according to Health Minister Amar Ramadhin, data shows that a mutated variant of the coronavirus from neighbouring Brazil is now also causing many young people to become infected and die.

On Saturday, for the third consecutive day, Suriname registered seven deaths and more than 200 new infections.

President Santokhi also noted that the records show that persons who recently died of COVID-19 had not been vaccinated, he, therefore, urged citizens to be vaccinated.

The Netherlands has promised Suriname more than 500,000 doses of Astra Zeneca, with the first batch expected in Suriname's capital, Paramaribo, next week.

China has also donated 100,000 doses of the Sinopharm vaccine to Suriname and logistical preparations are currently underway to transport them to Suriname.

Meanwhile, the Surinamese authorities are in talks with Russian and Cuban counterparts to also obtain vaccines developed in Russia and Cuba.