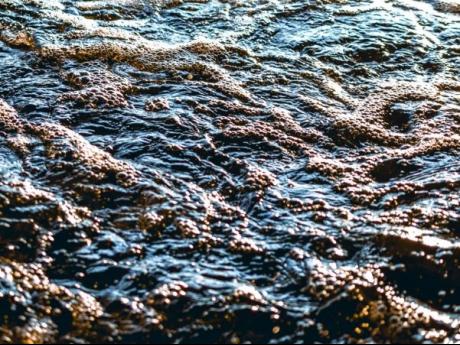 An estimated 2,000 litres of heavy crude oil had flowed into the sea at Gordon Cay - Contributed photo.

Container ship CSS Wind has been detained pending the payment of costs incurred for the cleanup of an oil spill from one of its containers on Wednesday.

An estimated 2,000 litres of heavy crude oil had flowed into the sea at Gordon Cay.

The ship should have left the Port of Kingston on Friday but has been prevented from doing so.

Director of the Environmental Management and Conservation Division at National Environment and Planning Agency, Anthony McKenzie, told The Gleaner on Sunday that the agency took out an enforcement order against the ship and its local agent Perez y Cia Jamaica, barring the vessel from leaving port until the full cleanup costs have been determined.

“We haven't concluded on that yet, we will conclude earlier in the week. So the ship is not able to move at this time.”

Captain Steven Spence of the Maritime Authority of Jamaica (MAJ) said the agency's investigation found that the hazardous liquid was stored in flexi bags, as against the conventional method of storage tankers, and that the bags fell victim to Jamaica's high tropical temperature.

“I think that due to the high temperature there was some sort of explosion because I can see other containers bulging and there was a spill of about 2,000 litres of the liquid.”

Spence further explained that instead of being placed in the cargo hold, the container was being transported on the ship's deck and expressed concern about the fact that there were at least 21 more flexi bags on board.

He said the bags would not be allowed to continue the journey in this way.

Rear Admiral (retired) Peter Brady, director general of the MAJ, told The Gleaner that the ship left Port Lisas in Trinidad and Tobago on Saturday, June 19, and arrived in Jamaica on Tuesday, June 22.

The incident reportedly occurred while crew members were conducting what should have been routine bunkering operations, which involves either taking on or discharging fuel, and that during the exercise, the liquid coated the starboard hull, plating it and entered the sea.

The ship, which has a gross tonnage capacity of 9,978, was also served with a detention order by the MAJ under the Port State Control Regime, which empowers it to hold the vessel in port pending the completion of investigations or if it has any doubts that the vessel may be a danger to navigation.

“The decision to detain a vessel is not something that we do lightly because the cost to the shipping company can be very high and you have to make sure it is not a spurious detention. You have to really have good cause and in this case, they spilled hazardous material, heavy oil into the sea,” said Brady.

Meanwhile, the Office of Disaster Preparedness and Emergency Management has been advised of the matter but had not received a report of the cleanup operations up to Sunday afternoon, acting Director General, Richard Thompson, told The Gleaner.

The Jamaica Defence Force Coast Guard, which was the first responder entity to the incident, used booms to contain the spill, with other agencies helping with the clean-up.

“We have not gotten a report on it as yet. Even though we are the national coordinator, we are not the on-scene commander who responded directly to the spill,” said Thompson.

“When it has been determined how the spill was caused and who caused it, then whatever resources were employed and any additional costs incurred as a result of the cleanup, that person would have to pay,” he explained.