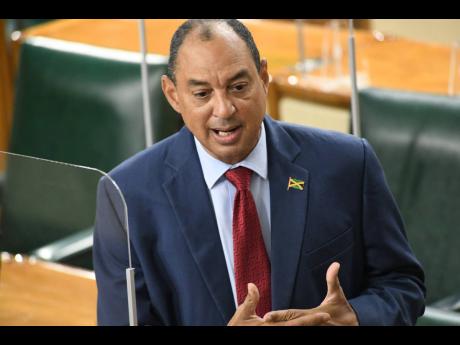 Another 10 lawmakers have indicated that they have not been contacted by the Integrity Commission (IC), Jamaica’s anti-corruption agency, about its investigation involving two parliamentarians who allegedly cannot satisfactorily explain how they’ve earned their wealth.

But one of the legislators, Senator Don Wehby, says the commission needs to urgently complete its probe to end speculation.

Five government senators last week indicated they were not aware of being the subject of the IC’s investigation: Wehby, Ransford Braham, Sherene Golding-Campbell, Dr Saphire Longmore, and Leslie Campbell, the minister of state in the foreign affairs ministry.

It was the same response from five members of the Opposition’s cohort in the Upper House: Janice Allen, Damion Crawford, Floyd Morris, Lambert Brown and Sophia Frazer-Binns.

This latest 10 join the 12 from last week who also said they were not aware of any investigations involving them. That brings to 22 the total number of parliamentarians who have given definitive response to the same question being asked of all 84 legislators.

So far, half of the parliamentary group has been contacted in the Sunday Gleaner’s poll of representatives. The ruling Jamaica Labour Party (JLP) has 61 representatives, while the Opposition People’s National Party has 22.

There is one independent who has publicly expressed support for the policies and programmes of the JLP.

Wehby said he would not support removing the controversial Clause 53 of the Integrity Commission Act, which blocks the entity from revealing any details of its investigation.

The reason, he said, is based on auditing standards in the private sector of which he’s a major player.

“When you do an audit report for a review it is discussed with the company that you are reviewing and the n the management must have a chance to review before it goes to the board of directors,” said Wehby, the group chief executive officer of GraceKennedy, a leading Jamaican multinational food and financial services company.

“If somebody is being reviewed and there is a reasonable explanation of why, then we have to be careful how we call names,” he noted.

However, the investigation should be wrapped up quickly to end speculations, Wehby said, indicating that he would back changes to the law requiring a time frame for the completion of probes such as the ones involving the politicians.

“They need to resolve it quickly. That’s the main thing. So, when we have an audit and there are audit points, the main thing is that you have to resolve it within two weeks,” Wehby said, pointing to the “strict” turnaround timelines at GraceKennedy.

“If you do an audit or you review the file and there are issues, you go to the person, ask for an explanation, and if you don’t get an explanation within a certain time frame, then you might have to release the name.”

The Integrity Commission revealed in its recently tabled 2020-2021 annual report that two lawmakers were referred for prosecution for submitting false information on their income and assets, while two others – believed to be the same persons – are being investigated for illicit enrichment.

Illicit enrichment arises under the IC Act when the person fails to explain or give a satisfactory reason for owning assets disproportionate to their lawful earnings.

The Integrity Commission Act, which was proposed under the previous Portia Simpson Miller administration and enacted into law in 2017 under the current Andrew Holness administration, blocks the commission from providing any details about its investigation until a report is tabled in Parliament.

“Parliamentarians”, suggesting a current member, was the choice of word used in a report which elsewhere made it clear when it was referring to former members of parliament (MPs) or senators.

NOT AWARE OF INTEGRITY COMMISSION PROBE