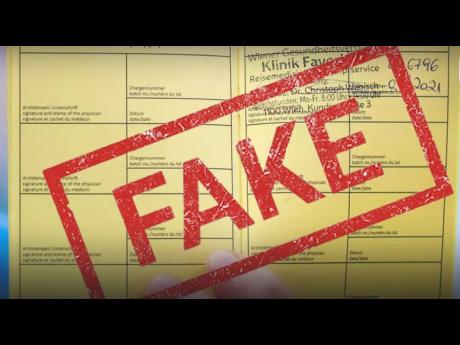 There is a growth of a global black market for fake vaccination cards and fake test results as travellers try to get around entry requirements and restrictions aimed at stemming the spread of the virus that globally has infected over 200 million people and killed more than four million. 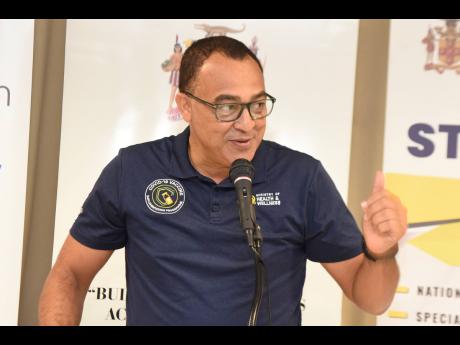 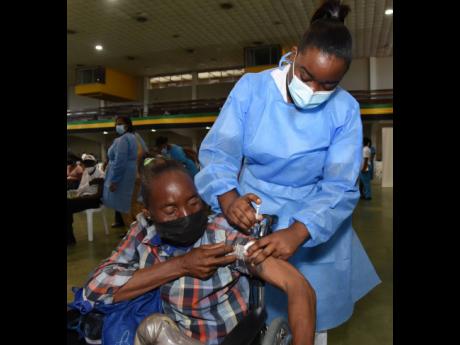 The Government has had an uphill task of combating vaccine hesitancy, with recent data from the health ministry confirming the trend, especially among some front-line workers.
1
2
3

The authenticity of Jamaica’s vaccination cards issued to persons who have taken their COVID-19 shots could very well be tested amid an increasing number of cases of fake cards being sold in the Caribbean and other countries. This, as countries...

The authenticity of Jamaica’s vaccination cards issued to persons who have taken their COVID-19 shots could very well be tested amid an increasing number of cases of fake cards being sold in the Caribbean and other countries.

This, as countries around the world implement measures to push people to take the vaccine, with announcements that unvaccinated persons will be denied certain services and access to a number of areas.

Vaccination cards are issued once persons are inoculated, which also aids in the recording and tracking process.

Speaking at a recent COVID-19 press briefing, Jamaica’s Health and Wellness Minister Dr Christopher Tufton touted the newly acquired vaccination management system as a means of verifying the information provided on the vaccination cards in the event of fraudulent replication.

But with no airtight safety features, except that they are signed and stamped by the health ministry, much in the same way an immunisation card is handled, the authenticity of the information captured on the cards “can be fraudulently produced”, Tufton conceded to The Sunday Gleaner via written responses on Thursday.

As a safeguard, however, “we do have a database of all vaccinated persons, which allows us to verify the validity of a card”, the minister said.

“The cards are signed and stamped but I am sure if someone has the means and motive, it can be fraudulently produced … However, the validation is with the database, which is not accessible to anyone and has security features to protect the public,” he said.

So, if the need arises, “we can check the database against [the physical] cards”, he said.

The vaccine management system is also a “very important tool” in the ministry’s arsenal used for planning purposes to determine which age cohort or location to target, the health minister added.

PROBLEM ACROSS THE CARIBBEAN

On Friday, news emerged from Guyana that its ministry of health is investigating reports of fake COVID-19 vaccination cards being sold.

Guyana’s Minister of Health Dr Frank Anthony, who made the disclosure, warned that anyone found in possession of bogus documents would face the courts.

Trinidad and Tobago’s ministry of health is also probing reports of the sale of counterfeit immunisation cards.

In a bid to counter the scam, the Trinidadian government has begun providing exact amounts of immunisation cards to vaccination sites each day to match the number of COVID-19 vaccines available for distribution.

Cases of counterfeit vaccination cards have also surfaced in Belize, Canada, and the United States, among other countries, amid the growth of a global black market for fake cards and fake test results as travellers try to get around entry requirements and restrictions aimed at stemming the spread of the virus that globally has infected over 200 million people and killed more than four million.

In response, the international community has been moving towards vaccination passports, with a raft of nations implementing their versions of the vaccine management system to allow travellers to move about, especially in a bid to boost business and save their faltering economies.

For example, a European Union (EU) vaccine passport is being introduced across all 27 member nations – plus Switzerland, Iceland, Norway and Liechtenstein.

The World Health Organization’s (WHO) Smart Vaccination Certificate working group is also focused on establishing the specifications for a digital vaccination certificate to support COVID-19 vaccine delivery and monitoring worldwide.

Pressed on whether Jamaica is moving to create a digital version of the card or make it harder to replicate, Tufton said while there are “discussions” towards making the card more tamper-proof, he has “not had any discussions to this effect internally”, but has heard of proposals that make this possible.

Jamaica is apparently waiting on the global vaccine passport system. “Those standards could lead to a universal system,” Tufton said when asked about concrete plans to beef up the security of the cards.

Jamaicans who get vaccinated overseas are also not accounted for under the health ministry’s vaccination management system, but “it’s a discussion taking place now”, Minister Tufton said.

Jamaica typically gets scores of visitors to the island at this time of the year, with patriotic Jamaicans returning to celebrate the Emancipation and Independence holidays during the early part of August. The Dream Weekend set of parties, organised by Dream Entertainment, is also a staple at this time of year. However, there is fear that these events could become superspreaders of the coronavirus.

Speaking to whether or not event promoters would be able to validate the vaccination status of patrons, Tufton said they would have a difficult time “but [that] it is not impossible”.

“The question is: would persons take the trouble to verify, especially if it would affect their business – unless it was a legal requirement like alcohol requirements?” the minister reasoned.

“Truth is, we need to get the society, in the first instance, to understand the value to themselves of complying and the dangers of trying to beat the system. Otherwise, we have to determine what can be legislated and can be enforced,” he said.

But, “even with electronic vaccine cards, there would still need to be a validation and enforcement mechanism”, Tufton said.

It remains unclear how the vaccination status of overseas patrons to these events are verified, a point newly elected president of the Jamaica Manufacturers and Exporters’ Association (JMEA), John Mahfood, expressed concern about.

“I don’t think the risk is high for somebody to go through the trouble to counterfeit a certificate to get into a party. I think the bigger risk is of people coming into Jamaica since there is no standard certificate worldwide,” Mahfood told The Sunday Gleaner.

Currently, visitors to the island must present an approved Travel Authorization form prior to boarding, and all travellers ages 12 and up, regardless of nationality, are required to show proof of a negative COVID-19 molecular (PCR, NAA, RNA) or Antigen test performed by an accredited lab, within three days of the travel date.

Promoter Andrew Bellamy, who recently had his first staging of the famed ‘I Love Soca’ event since December 2019, introduced a VIP section for vaccinated patrons.

“In order to enter our vaccinated section, patrons had to show their MOHW COVID-19 vaccination card, clearly stating that they were fully vaxxed, supported by a National ID, and both were checked by a medical officer before entering,” Bellamy said, adding that the trend of catering to vaccinated patrons only or having a special section for inoculated patrons could very well become a key feature in the ‘new normal’ of event staging.

Responding to whether he thinks Jamaicans would likely create bogus cards in an effort to attend events, Bellamy said the act would be “disheartening”.

“Quite frankly, it would be stupid,” he said.

The Government has had an uphill task of combating vaccine hesitancy, with recent data from the health ministry confirming the trend, especially among some front-line workers.

Mahfood is also hoping Jamaicans will not develop an appetite to counterfeit the vaccination cards.

“There is not a lot of incentive for people to go and produce counterfeit vaccine cards. But if someone wanted to, the cards that are issued are pretty simple to be duplicated,” he reasoned.

Meanwhile, the results from samples sent overseas to be tested for the Delta variant of COVID-19 have not yet returned, Minister Tufton said.

Jamaica is also testing for other variants but the Delta and the Brazilian variants are the ones of greater concern, Minister Tufton noted.