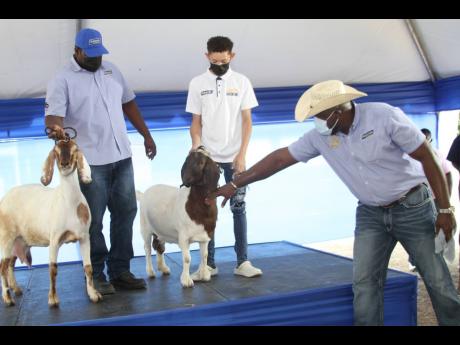 Nathaniel Stewart
Samuel Golding (right), owner of Gold Mine Boers International, shares best practices with members of the small ruminant industry during the GOAT seminar put on by Nutramix at the Denbigh Agricultural Showground in May Pen, Clarendon, on Wednesday, August 4. 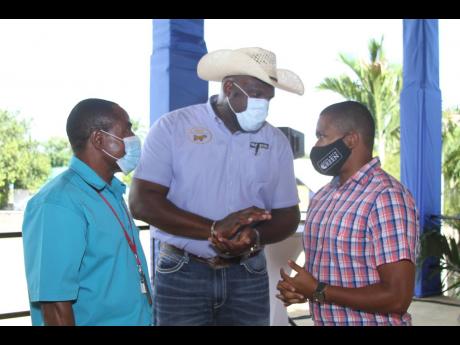 The ongoing COVID pandemic has resulted in a significant fallout in many sectors of the economy, but not for goat farmers, who are reporting a bump in demand for goat meat since the onset of the virus.

Goat farmers who were in attendance at a seminar held on the grounds of the Denbigh Agricultural Showground on Wednesday, August 4, disclosed that since the pandemic, the sale and consumption of goat meat has actually increased. The seminar, which is a partnership between Nutramix and Gold Mine Boers International, focused on advanced breeding techniques, specifically artificial insemination and embryo transfer.

Dr Gabrielle Young, co-proprietor of TrinJam Farms in Clarendon, told The Gleaner that her business has seen a 50 per cent increase in goat meat sales. She noted that more consumers are now purchasing meat from local farmers as a trusted source for protein. She said consumers are not just buying the meat for special or entertainment events, but also for cooking at home on a regular basis.

“The goat meat consumption has shifted a lot from entertainment such as for nine-nights, funeral or wedding purposes, and it has shifted to home consumption. We find there’s a lot of housewives calling farmers asking for goat meat, and they are trying to source it from the farm, “ she told The Gleaner.

Acknowledging that scepticism has been a factor impacting demand, Young said more consumers are now reaching out directly to farmers and as a result, demand is increasing. “They often say they don’t know where some of the goat meat is coming from when they buy from some of the meat shop. So they believe when they buy it from the farmers on farm, they are more likely to get local goat meat, where they know where the source and quality is coming from,” she explained.

Soren Fisher, a goat farmer for eight years, also noted an increase in market for his produce over the last year. He noted that the price of the meat has increased from $800 to $1,200 per pound.

Canon Golding, who has been in the goat-rearing business for over four decades, said the business is very lucrative, adding that he has also recorded an increase in sales since the COVID-19 pandemic.

Minister of Agriculture and Fisheries Floyd Green noted that Jamaica spends US$1.5 billion annually to import goat and sheep meat, but the local market supplies only 25 per cent of the demand for goat meat. Last year, Jamaica produced 663,198 kilogrammes (kg) of goat meat, which is a decline from the 127, 764kg supplied in 2019. For sheep meat, the local market supplied 4,689kg in 2020, and 5,844kg in 2019.

He expressed his support for artificial insemination, adding that technology and research can boost the agriculture industry.

Young, who is also the senior livestock support manager at Nutramix, advised that with artificial insemination, Jamaica can supply up to 10 per cent more of the local demand.

Golding, who owns Gold Spring Farms in St Ann, shared similar sentiments. “We did some (articial insemination) for our stock last year and what we are seeing is better than expected, so we are seeing some good stocks coming up,” he shared.

With the cost of one straw of semen costing $13,000, Golding said it is a worthwhile investment.

“The price for one of those live animals is exponential , and we can get the semen for less than even a fraction of what that live animal is worth, so bringing these semen and embryos would be the best thing possible. Jamaica can now have the best of the best in the world,” reasoned Golding.