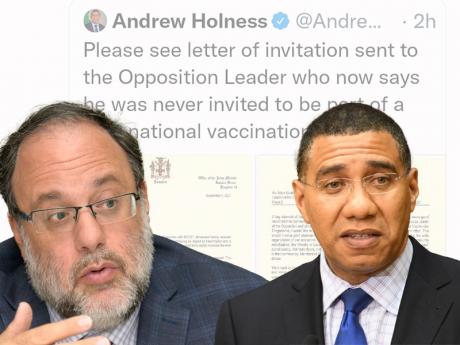 It started with a comment Golding made on Friday in response to a user in which he claimed he was never invited to join any of the national vaccination tours involving the prime minister.

"The JLP Government are on a frolic of their own. No spirit of national unity from the PM. Just politricks," added the Tweet from Golding's account minutes to 11 p.m.

Just before 6 o'clock Saturday morning, a response came from the Prime Minister.

The account posted a two-page letter which Holness contends was sent to Golding on September 1.

Holness told Golding that the Government then intended to formally launch the national vaccination programme to which the opposition leader would be invited to bring greetings.

"This would be a great symbol of national unity on the importance of vaccination. My office will be in touch to provide further details of the launch," the letter said.

But Golding hit back.

He acknowledged receiving the letter but added that the follow-up call mentioned "never happened".

"No call. No follow-up to bring greetings, and you didn't inform me of a launch date nor of any blitz dates since then," said Golding, who is also president of the People's National Party (PNP).

So far, there's been no response from the Prime Minister who leads the Jamaica Labour Party (JLP).

Holness, his deputy Dr Horace Chang, who is also JLP general secretary, and Golding, along with his party's General Secretary Dr Dayton Campbell, met on September 3 to discuss the country's vaccination strategy and a role for the opposition party.

The PNP has been contending that the Government is using the tours as a political tool to prepare for upcoming local government elections.

Holness yesterday said he was not focused on elections.

This latest tussle also follows a call from the Private Sector Organization of Jamaica for both political forces to make a joint push to improve vaccination uptake.

The government, which had received commendations for its COVID-19 response in the early days of the pandemic, has been rocked by a series of perceived missteps especially since the rollout of the vaccines.

Just last week, Government MP, Juliet Holness, the wife of the Prime Minister and who is also deputy Speaker of the House of Representatives, criticised the Christopher Tufton-led Health Ministry for a vaccination policy that was approved by the Holness Cabinet.

The fact that almost 60,000 doses of AstraZeneca vaccines had to be dumped last month has also raised questions about the government's handling of the vaccination drive.

Jamaica has administered approximately 860,482 doses of vaccines with the number fully vaccinated standing at 337,419, according to this morning's figures on the Ministry of Health's vaccination tracker.

The government is targeting 1.9 million people for full vaccination by March next year.