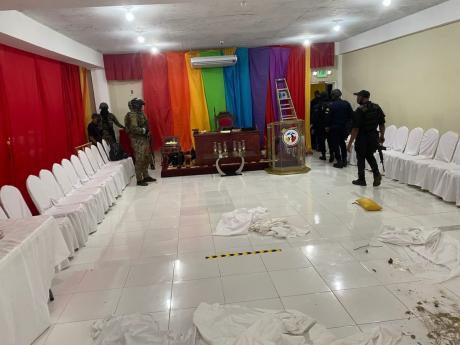 Members of the security forces on an operation at Pathways International Kingdom Restoration Ministries in St James - Contributed photo.

The mother of one of the victims of Sunday's triple killing at the Kevin Smith-led Pathways International Kingdom Restoration Ministries in Paradise, St James is claiming that her son was tricked into visiting the church with a promise of a much-needed kidney.

According to 58-year-old Sharon Parkins, her son, 38-year-old Michael Scott Brown, who succumbed to stab and gunshot wounds suffered at the church, was admitted at the Cornwall Regional Hospital with a kidney-related problem and received a call to visit the church.

Parkins further said that after receiving the call, her son discharged himself from the hospital with medical tubes still attached to his body.

"Him sick wid him kidney and did admit to hospital and me did a look seh if him dead, it would ah be because him kidney fail him. Mi neva did ah look fi dem kill him at the very same church that him go," said the grieving mother.

The mother, who was at her home in Orange district, also in St James, when The Gleaner visited Wednesday, said her son, who leaves behind a 12-year-old daughter, did not live with her but they were always in close contact.

“The last time mi talk to him was one day inna last week," said Parkins, who said his son resides in the neighbouring community of Irwin.

According to Parkins, she was a member of the church but she became uncomfortable with the behaviour of the pastor and so she stopped attending.

According to Parkins, persons who allegedly witnessed her son's murder told her that when he arrived at the compound the pastor, who had started his ritual, told him that he was of unclean blood and was not worthy to go on the heavenly journey aboard an ark.

She said she was told that a leader of the church pulled out her son's hospital tubes and shouted that he was not worthy.

"I hear dat when my son see him do that, him turn and ah try fi run and dem run him dung and stab him inna him neck and shoot him inna him back," Parkins said.

Parkins said she first heard about the incident at the church in the news but did not know her son was among the victims, as he was supposed to be in the Cornwall Regional Hospital.

Subsequent to the incident, she learned from the hospital that he had discharged himself.

However, before she was able to file a missing person report with the police, she got the sad news from other church members that he was killed at church.

Meanwhile, Brown's sister, 21-year-old Petrina Malcolm, described him as a kind, loving and caring individual who never deserve to die in that manner.

"I am feeling bad, sad and angry that he was killed in that manner."