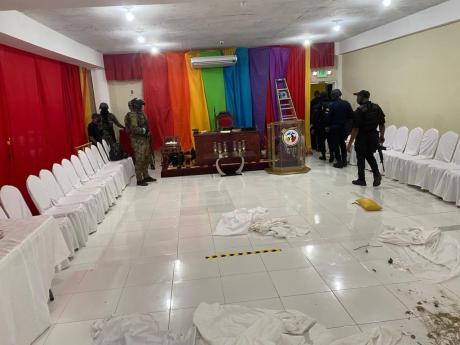 The members of the church claim that religious leader Kevin O Smith would prophesy or get a vision about people's deaths.

The Office of the Director of Public Prosecutions has released a statement detailing the allegations against Andre Ruddock the accused of the murder of Tanika Gardener, a fellow member of the Pathways International Kingdom Restoration.

Gardner was killed during a ritual on Sunday, October 17.

Another member was also killed during the ritual at which the now deceased pastor Kevin O. Smith was presiding.

See the DPP's full text below:

1. The Pathways International Church is located at 144 Albion Street, Montego Bay in the parish of St. James. Dr Kevin O. Smith purported to be trained in Technical Psycho Therapy and was the Leader/Pastor of this organisation up to the time of his demise.

2. The deceased, Tanika Gardener, was introduced by her aunt to the church when it was located at its previous address.

3. The accused, Andre Ruddock, was employed by Dr Smith to take care of his animals including seventeen goats and three cows and to perform other jobs around the church.

4. According to witness accounts, Dr Smith was addressed by the titles “His Excellency”, “Daddy” or “Father.” He later asked to be addressed as “His Majesty” because he was the king.

5. In the initial days of its establishment, the church operated like an ordinary church for most members with marriages, baptisms, sowing of seeds and deliverance ministries being the norm. The members of the church claim that Dr Smith would prophesy or get a vision about people's deaths.

6. One witness alleges that approximately two (2) weeks prior to the incident, Dr Smith began to act strange, and changed what he taught in the church. Dr Smith said that Selassie I was God and told his congregants that they could listen to secular music from persons such as Sizzla, Capleton, Buju Banton, Beenie Man, Queen Ifrica and others. Dr Smith also told his congregants that they could smoke weed (ganja) because it can carry them to a higher level of consciousness.

7. It is alleged that if Dr Smith wanted a donation from the church and he believed that a particular member had money and did not want to give it to him, he would say that the member would crash and die, and he would send out his wrath on that member and his/her family. Dr Smith would allegedly use threatening terminology to get the money, and his method was described as dictatorial.

9. The church had a Facebook page, where Dr Smith would post information in relation to the church and communicate with his congregants.

11. On Friday, October 15, 2021, a post was made on the church's Facebook page informing persons to attend the church to update their membership.

13. On Saturday, October 16, 2021, members gathered at the church, dressed in white as they were ordered to do by Dr Smith. At about 6:00 p.m. Dr Smith told them that before entering the church they should bow down on their knees and he will judge them and write their names in the “Lamb's Book of Life”. He also instructed them to cover their heads with something white, as he did not want anyone to look on his glory. This “service” continued until about 1:00 a.m. on Sunday, October 17, 2021. October 17, 2021 (Day of Incident)

14. On Sunday, October 17, 2021, Witness A and the accused Andre Ruddock went to feed Dr Smith's animals. At about 9:00 a.m. Dr Smith ordered the members to throw away all sodas and fill the bottles with water, as well as to throw away all canned food.

15. At about 2:35 p.m. Witness A observed when Dr Smith allegedly arrived at the church in the company of now deceased Kevaughn Palmer and a police officer. The church was the scene of the crime. Dr Smith allegedly shouted that he was, “God in the flesh, come in the ark before it closes”. He referred to the church as the “Ark”.

16. Witness A indicates that Dr. Smith told the members to throw away all tissue, wipes and soap. While disposing of the items a bottle of wine broke. Approximately twenty (20) minutes later, Dr Smith told the now deceased Kevaughn Palmer that whoever was in front of the wine, he (Palmer) should cut that person's throat so that they can enter into the kingdom. Dr Smith instructed the now deceased Kevaughn Palmer to cut the throat of Witness A and other persons. Witness A said he went to the 'safe side'.

18. At this juncture the other members of the church lay down on the ground and covered themselves. Dr Smith then began to destroy the glass on the altar, the window and other items.

20. Michael Brown (now deceased) was a member of the church at the time of his demise, who was suffering from a health issue which resulted in tubes being attached to his body. Dr Smith told the now deceased Michael Brown “You have to die, but you will rise again because I am the resurrection and the light”. Thereafter, Dr Smith pulled the tubes from Mr Brown who then bled to death. Dr Smith told Witness A and the accused Andre Ruddock to leave Mr Brown to die.

21. While the members were gathered outside the church they chanted, “Yeshua, Yeshua!”. Dr Smith said, “a who dat”. Thereafter, Dr Smith called the names of persons from a list that he had in his hand. The persons whose names were called were allowed to enter the church building (the “Ark”). These persons signed “999” beside their names and thereafter Dr. Smith signed “999” beside their names.

22. When the now deceased Tanika Gardener arrived at the gate, she asked a little boy to assist her. The little boy then said, “pastor she have luggage”. Dr. Smith asked Ms Gardener “Is your blood clean?”. He also asked her about a particular health issue from which she was suffering at the time.

27. When the firing of the shots ceased, and the police were able to enter the church, the bodies of three (3) deceased persons were discovered; Tanika Gardener, Michael Brown and Kevaughn Palmer. Arrest

28. The members of the church who were present at the scene including Andre Ruddock, were escorted to the police station.

29. On Monday, October 18, 2021, the accused Andre Ruddock gave a Caution Statement in the presence of two (2) Justices of the Peace for the parish of St. James. Court Proceedings

30. The accused Andre Ruddock was placed before the Home Circuit on Wednesday, October 27, 2021, after the Director of Public Prosecutions proffered a Voluntary Bill of Indictment. The accused Mr Ruddock indicated that he was unable to afford the services of an Attorney-at-law. As such, the matter was adjourned until Wednesday, November 3, 2021, to allow Senior Counsel to be assigned to him by the Legal Aid Council.

31. On Wednesday, November 3, 2021, the accused Mr Andre Ruddock was placed before the Home Circuit Court. Counsel Mr Anthony Williams indicated that he has been assigned by the Legal Aid Council to appear on behalf of Mr Ruddock. Counsel Ms Venice Brown also appears with Mr Williams in the matter.

32. The Court having heard the allegations, ordered a Psychiatric Evaluation for Mr Ruddock. The matter was thereafter adjourned until Tuesday, December 7, 2021.