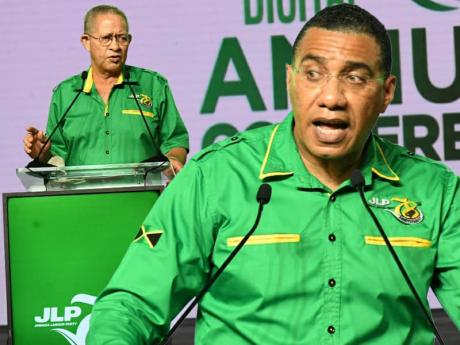 Golding: Too often when Holness should be hitting boundaries and putting runs on the board, he is being forced to play defensive stroke to protect the wicket.

Former Prime Minister Bruce Golding has urged minister's in the Andrew Holness-led government not to let down the Prime Minister.

At the same time, Golding said he has told Holness that he has immense political capital that he should not be afraid to use.

"If you don't use it, you will lose it," Golding warned today as he addressed the Jamaica Labour Party (JLP's) 78th annual conference at the National Indoor Sports Centre in St Andrew.

Five ministers have either resigned or been reassigned because of scandals since the JLP took the reins of government in 2016.

According to Golding, Holness was being "forced on the backfoot" too often.

"Too often when he should be hitting boundaries and putting runs on the board, he is being forced to play defensive stroke to protect the wicket... It is not fair to him,” said the former Prime Minister.

In March 2019, Education Minister Ruel Reid resigned after allegations of fraud at his ministry.

Reid's resignation followed that of Science, Energy and Technology Minister Dr Andrew Wheatley, who demitted office due to the fallout over the Petrojam and NESoL scandals.

Months ago, Agriculture Minister Floyd Green stepped down after video footage emerged showing him attend a party on a no-movement day amid the COVID containment measures.

Meanwhile, Golding said the JLP's sizable support across the island is not enough to secure general wins.

According to Golding, the party must continue to build on the goodwill towards Holness, among people who may not identify as Labourites.

"I want to make it very clear that, that goodwill he enjoys is very delicate, is very fragile. It has to be handled with the utmost care. It is something that can vanish in the twinkling of an eye," said Golding.