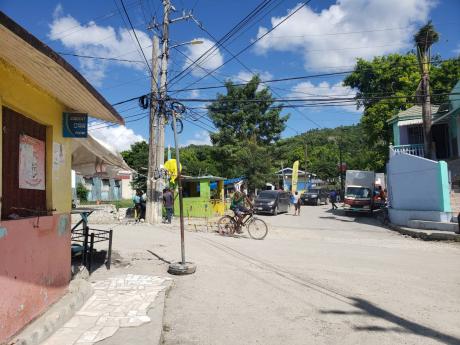 shanna monteith
A view of Seaforth square in St Thomas where state-sponsored Wi-Fi has been established.

DESPITE EXPRESSIONS of gratitude to the Universal Service Fund (USF) for establishing a hotspot zone in which community members of Seaforth in St Thomas will be able to access free Wi-Fi, some residents are mindful that their children will not be able to benefit from the commodity.

The multi-billion dollar project, which was launched in the community on Wednesday, is the first of many stops to be made by the USF, an agency under the Ministry of Science, Energy and Technology, as a part of its mandate to ensure access to information and communication tools to facilitate development.

The agency shared that it is working to establish 189 community Wi-Fi hotspots in 63 constituencies across Jamaica by March 2022.

The local area network, which was established in the centre of Seaforth, spans a range of 800 feet and allows for the connection of up to 200 devices concurrently.

While applauding the initiative, residents residing outside the range shared their reluctance to send their children to the area in which access is granted because of safety concerns.

“I am grateful for what they are doing in the area, though I am out of the 800ft, so it wouldn’t benefit me. However, I am not going to send my children to the square because everybody knows that Seaforth is in a crisis right now and it’s not really safe for the children to be in the streets,” shared Marcia Francis of Blacksmith Lane.

The community was recently named by the police as one of two troubled areas which have recorded a flare-up of violence in the parish.

Speaking with The Gleaner, the mother of two children who are currently registered for online classes, said she is not willing to risk their lives for Internet access.

“You don’t have to be involved in anything, it can just be being at the wrong place at the wrong time so it’s better to be safe than sorry. I would rather continue to struggle to see if I can buy the credit to put on the service and when they can’t attend class, we just let the teacher know,” Francis said as she made a request for another router to be set up closer to her home.

Sharing plans for the space, USF’s CEO Daniel Dawes said that discussions will be had with the member of parliament for Western St Thomas in which Seaforth falls, to outfit the area with gazebos, tables and chairs to facilitate children who are outside the Internet’s reach.

He noted, too, that the free service will also be set up in the communities of Cedar Valley, Trinityville, Bath, Port Morant and Duckenfield over the next few weeks.

“By the end of the calendar year, we are also programmed to deploy three public Wi-Fi in Morant Bay. This is different from the community Wi-Fi which goes into the heart of the community. The public Wi-Fi is within the township and available for all,” he said.

During his address at the launch event, Dawes revealed that specific limitations will be put on the provision as the service is being provided for the primary purposes of education, research and business.

Also in attendance at the launch event were Principal of Seaforth High School Calbert Thomas, along with some of his students, Councillor of the Seaforth Division Joan Spencer and Mayor of Morant Bay Michael Hue, who all heartily welcomed the initiative.