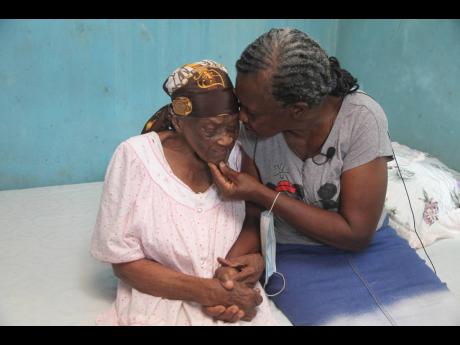 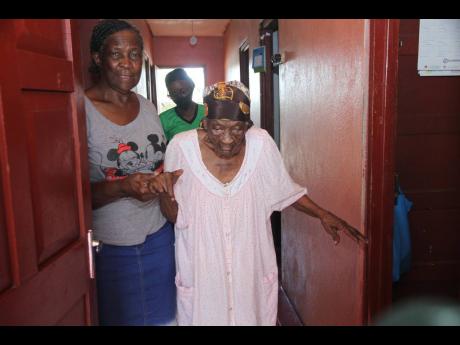 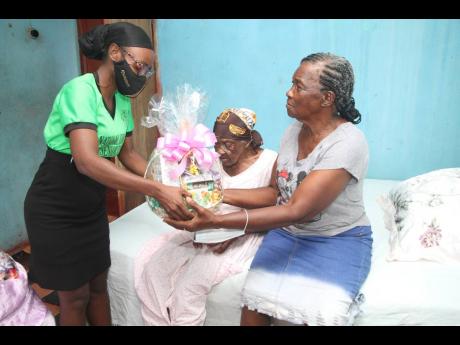 Nathaniel Stewart
Tashane Young of the National Council for Senior Citizens, Ministry of Labour and Social Security, Clarendon, presents a basket to Louisea McDonald of Bog Hole, the oldest person in Clarendon. 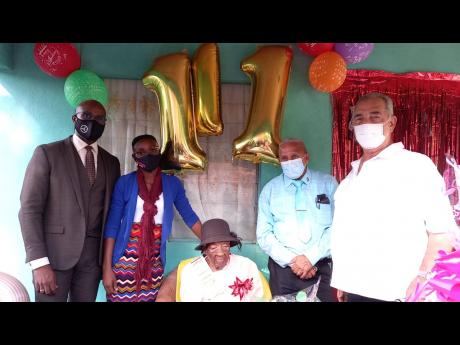 Photo by Olivia Brown
Centenarian and Jamaica’s oldest resident; Louisea McDonald, celebrating her 111th birthday at her home in Bog Hole, Clarendon, on Wednesday, December 1. She is flanked (from left) by Clarendon Northern Member of Parliament Dwight Sibblies; Toshane Young of the National Council for Senior Citizens, Winston Maragh, mayor of May Pen; and Clarendon Custos William Shagoury. 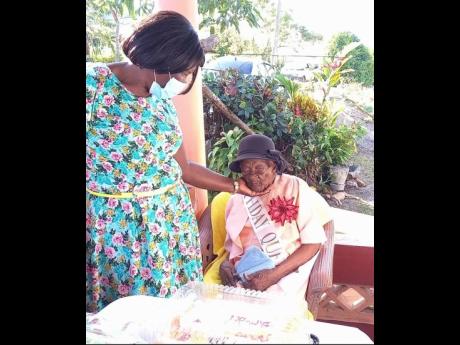 Photo by Olivia Brown
Phyllis Black enjoys a light moment with her mother, Louisea McDonald, who celebrated her 111th birthday on Wednesday.
1
2
3
4
5

Donning a peach dress adorned with roses, Jamaica’s oldest resident, Louisea McDonald, embodied her ‘birthday queen’ sash as she rang in her 111th year on Wednesday.

McDonald, a retired dressmaker from the rural community of Bog Hole in northern Clarendon, was born on December 1, 1910. The centenarian, affectionately called Mama Lou, was celebrated at her home by stakeholders and residents in the parish.

Mama Lou, who fell asleep several times during the celebration, sent laughter among attendees when she expressed enthusiasm to sip her glass of non-alcoholic wine, to which she held tightly.

The centenarian’s daughter and caregiver, Phyllis Black, beamed with pride as she spoke of her mother. “People [as old as] me don’t have their mother around them, so I am happy I have my mommy. I feel happy when I go out on the streets and people ask, ‘Is your mother is the 111-year-old?’ I feel so delightful,” she said.

Among the attendees was William Shagoury, custos rotulorum of Clarendon, who expressed adoration for the centenarian as he presented her with a gift. Mayor of May Pen Winston Maragh was also on hand with a gift for Mama Lou, and a plaque on behalf on the Clarendon Municipal Corporation. “It’s a pleasure to be here with Mommy Louisea to celebrate her one hundred and eleventh birthday. It’s not very often these things happen,” said Maragh.

Member of Parliament for Clarendon Northern Dwight Sibblies assured the family that he will be making monthly contributions to Mama Lou’s well-being. Citing a fervent community spirit among Bog Hole residents, Sibblies added, “We are grateful for the way you have always rallied around each other and specifically Louisea. She doesn’t come outside often any more, she stays on the inside, but for the community to recognise her in this way we are really grateful,” said Sibblies.

One resident, Marcia Brown, told The Gleaner of Mama Lou’s undying, motherly love which extends beyond her children and her 196 grand, great-grand and great-great-grandchildren, describing her as a mother to the community.

“Since I’ve known her she has been like a mother to me [and] knowing she lived all these years, I feel so proud to know I could come here and celebrate her 111th birthday, because living at this age, you must have to be blessed,” said Brown.

Brown also shared sentiments expressed by the MP, that the centenarian’s daughter Phyllis was instrumental to Mama Lou’s longevity. “If she wasn’t getting the care she needed, she wouldn’t live as long as this,” Brown added.

Toshane Young, parish organiser for the National Council for Senior Citizens department within the Ministry of Labour and Social Security, said the occasion was particularly momentous as the parish had lost several centenarians to the COVID-19 virus.

Citing a plethora of work carried out to cater to the needs of seniors on the parish, Young said the woes from the hard work morph into pride when the team gets to celebrate milestone occasions. She said she is now focused on building stronger partnerships to cater to the needs of the seniors, as limited resources continue to hurdle some efforts. She also commended the officials for making the effort to celebrate with Mama Lou.