Farming is hard work, but rewarding 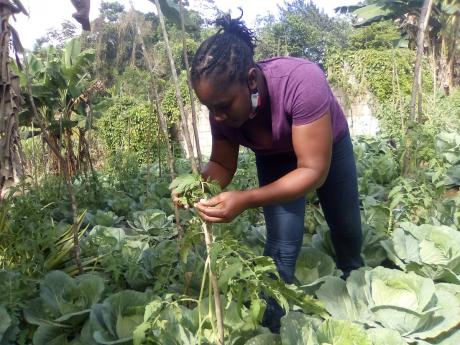 Rasbert Turner
Serian Clarke, a St Mary-based farmer, is seen working in her cabbage field, clearing weeds and tending to her crops. 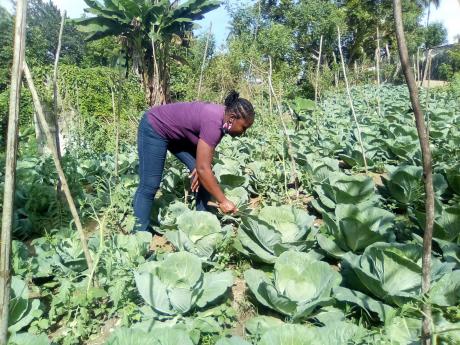 Farming has been traditionally considered a back-breaking job, but Serian Clarke has endured the hardships and is making a living as a farmer.

Clarke, who lives in Jeffrey Town, St Mary, is often seen working in her cabbage field.

She cultivates sweet pepper, pumpkin, string beans, sugar cane, tomatoes, and other cash crops. Clarke said that she sells her produce directly to vendors at Coronation Market, the largest market in Jamaica.

Farming wasn't her first choice, but she turned to agriculture – cash crops, primarily – because of limited employment opportunities in rural parishes like St Mary.

“I don't like handouts, so I have to work,'” Clarke said. “I decided to do some farming as I had access to land. It has been 10 years now, and it continues to provide for my family.”

Clarke, who is originally from Mount Rosser in the neighbouring parish of St Catherine, said farming is hard, but it can be rewarding.

The mother of a teenager, Clarke wryly said that she has to write off a fraction of her produce as automatic losses because of the occupational hazard of praedial larceny.

Praedial larceny is a constant concern for her and thousands of other small farmers, costing the sector, conservatively, $6 billion a year. Agriculture is already a high-risk industry, with hurricanes, pests, and disease – an unknown quantity annually. Theft is particularly deflating for farmers because the arrest and conviction rate is low.

Late last year, heavy rains destroyed a lot of farms, costing the agriculture sector more than $2 billion. Losses have also been incurred owing to storms in the early months of the Atlantic hurricane season in 2021, but the weather has stabilised towards the end of the year, with adequate rain and favourable sunshine.

The prices of farm inputs have steadily risen this year as part of a global spike.