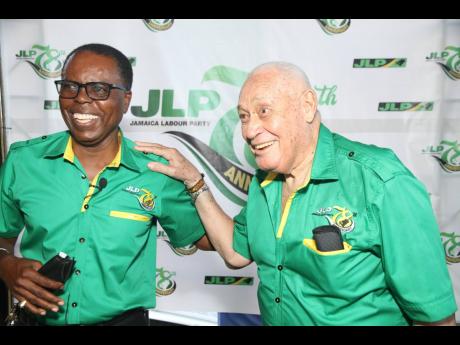 Nathaniel Stewart/Photographer
Lester Michael Henry (right), member of parliament for Clarendon Central, has a light moment with Joel Williams, councillor for the Denbigh division, during the Jamaica Labour Party’s 78th annual conference at the Denbigh Showground, one of 10 remote sites for the event, on November 28.

Evergreen Clarendon Central Member of Parliament (MP) Mike Henry has confirmed that he wants his protégé, Councillor Joel Williams, to be his successor whenever he demits office in the constituency.

However, the 85-year-old MP, who is the oldest sitting Jamaican lawmaker, has steered clear of disclosing any retirement plans.

“He is a senior councillor and he has my support 100 per cent,” Henry said of Williams.

“He is competent and he is my choice.”

The 10-term MP, who has maintained his grip on the Labourite stronghold since 1980, lost his first and only election in 1976 to late People’s National Party’s (PNP) member O.D. Ramtallie. The margin was 884 votes.

In 1980, however, Henry rode the momentum of the Edward Seaga landslide amid the ideological clash between socialism and capitalism. He turned the tables on Ramtallie, defeating him by 3,475 votes.

That political journey continued in the September 2020 general election, with Henry notching 6,745 votes to sweep aside the challenge by PNP newcomer Zuleika Jess, who mustered 3,003.

Williams, who has been at the helm of the Denbigh divison for 27 years, polled 1,084 votes, or 78.6 per cent of the total ballots, in the November 2016 local government elections.

The 59-year-old councillor said he is honoured by Henry’s commendation and is ready to take up the gauntlet, citing knowledge of the “culture of the constituency”.

“For any person who is involved in politics, if you don’t understand the people you are going to work with, you’re going to have a challenge. I understand the culture and that is the first order of business,” Williams told The Gleaner.

Describing Henry as a friend, teacher, and confidant, Williams said that the party stalwart has long guided his political career.

“There’s always talk in Jamaica that leaders don’t create their successors, but in this case, he is. Mike is an institution by himself ... tremendous experience. I have always said he is like a university. His experience in politics is just out of this world and I’ve learned a tremendous lot from him,” said Williams.

Referencing support from stakeholders, Williams is confident that he will assume Henry’s mantle and prolong his political tradition.

Williams said he is getting full support of the executive and workers of Clarendon Central.

“His legacy in this constituency is not normal. Mike came here in 1974 and the only election he lost was in 1976. Since then, he has won 10 straight elections ... . That is no ordinary thing,” he said.

But amid decades of electoral dominance, Henry has not escaped criticism about underdevelopment in Clarendon Central, with several communities lacking basic amenities, like water woes in New Longville and Mundle Town, and ramshackle roads in Race Track.

Williams contended, however, that Henry has been relentless in improving public infrastructure in the central Jamaica constituency.

“You will never satisfy everyone politically. Bucknor is now a community fully developed – people are owning their lands, putting up houses, good roads, water, community centre ... . None of that was here when he came here,” said the Denbigh councillor.