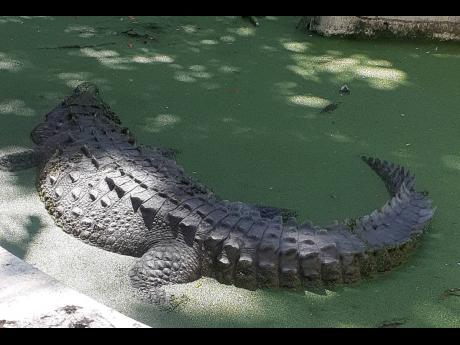 TREYA PICKING, an environmental officer at the National Environment and Planning Agency (NEPA), is advising residents of Montego Bay, St James, not to be alarmed by crocodiles living in the western city’s lagoon near the Bogue community, following reports that a crocodile was sighted in the area.

Picking gave the reassurance while speaking to The Gleaner on Wednesday, one day after a video surfaced on social media showing the reptile as it slipped into one of the sewage ponds near the National Water Commission’s (NWC) offices in Bogue.

“There are common misconceptions that crocodiles are dangerous animals and are aggressive, but the reality is that they are quite shy and docile. So if you keep a safe distance and are cautious around the area, then you can safely coexist with the crocodiles being in the pond,” he continued.

“We have had sightings reported in the Bogue Lagoon area, and the most recent report before this one was during last year, when we were made aware that a crocodile was seen in the sewage pond.”

Hugh Shim, manager of the Montego Bay Marine Park, agreed with the assessment, noting that crocodiles may only appear outside of their natural habitat if their food sources are lowered.

“The crocodiles have been in the lagoons for a long time, and it is just that people are seeing them more often now. Sometimes NEPA does not even bother to trouble them unless they become a danger to people. And they could become a threat if their food sources get depleted in the lagoons,” said Shim. “Then they will come on land and if people are wandering over there, they might attack them, especially if the people go near their eggs.”

Crocodiles are a protected species in Jamaica and it is forbidden to hunt them under Section 6 of Jamaica’s Wildlife Protection Act. Under Section 20 of the act, any person found guilty of an offence covered under the act, including the hunting of protected species, may be fined up to $100,000 or spend 12 months in prison.

NEPA is currently conducting a population survey of crocodiles in their natural habitats, which also include Salt Marsh in Trelawny and most sections of Jamaica’s south coast. According to the environmental agency, one recurring problem it has to wrestle with is the practice of hunting crocodiles for their meat, which, in turn, threatens the safety of the crocodile population.

Concerning the latest crocodile sighting in Bogue, Picking said that it would not be practical to relocate the reptile, particularly if there is no adequate fencing between the sewage pond and the wetlands.

“In these cases, because it is not feasible to relocate the crocodiles, we work with the NWC to monitor the crocodile populations and to sensitise the staff on the presence of crocodiles in these ponds. We have been monitoring this situation, and we have provided information to the staff in terms of sensitising and making them aware of what is happening,” said Picking.

The Bogue Lagoon, a protected fish and game sanctuary, has been the subject of controversy within recent years due to construction activities, which local stakeholders fear could disrupt the balance of the local natural environment, or even destroy it.

Interestingly, while crocodiles are often stigmatised as aggressive and dangerous, there have only been four recorded fatal attacks by crocodiles in Jamaica since 1847. As well, most crocodile-caused injuries are attributed to the reptiles being attracted to fishermen who hunt in their territory while carrying the scent of fish.

Meanwhile, in a brief response, NWC Public Relations Manager Andrew Canon said the crocodile sighting had been confirmed and that there had been a previous sighting last March.

“It was reported to NEPA on a previous occasion, in March 2021, that crocodiles were seen at the location. We did receive a response highlighting the protocols, and it was indicated that the situation is not strange,” said Canon.

“NEPA was contacted about the current situation and they did promise to visit the location,” he added. “It should be noted that the facility is adequately secured and public access to the same is prohibited.”