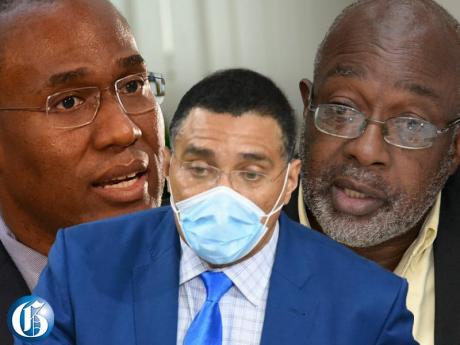 The Government is turning up the pressure on commercial banks saying increased user fees will cause greater stress for Jamaicans.

In the past 24 hours, both Prime Minister Andrew Holness and Finance Minister Dr Nigel Clarke have denounced the fee adjustments.

"Business leaders must pay attention to the social context; I have a higher duty to ensure equity and to protect the vulnerable," Holness said Tuesday evening at a Jamaica Stock Exchange conference in New Kingston.

A day later, Clarke called the actions of the banks callous, saying they appear tone-deaf.

According to Clarke, increasing fees will not encourage people to become a part of the formal banking system, especially in the context where the institutions are discouraging people from visiting physical locations for transactions.

Meanwhile, the minister said he has since held dialogue with the banks and expects them to be responsive.

In a statement Wednesday, Opposition Member of Parliament Fitz Jackson said he welcomed the pronouncements of the Prime Minister and the Finance Minister.

But Jackson, who has long been agitating for a structure to govern bank fees, wants legislative protection.

He said the administration, using its majority, has continued to block the passage of a Bill that proposes minimum services that should be free to the public.

"This ensures the ongoing opportunity for the Government to act 'at the drop of a hat', in protection of ordinary deposit holders,” Jackson said.

The bill has been kept on the order paper since its defeat in 2018, and re-tabling in October 2020.

Jackson maintains that it would ease the burden on consumers while still allowing banks to earn profits.

“We are being called upon to put Jamaica first, look out for the ordinary man, and stand up for what is right, even for once,” he said.