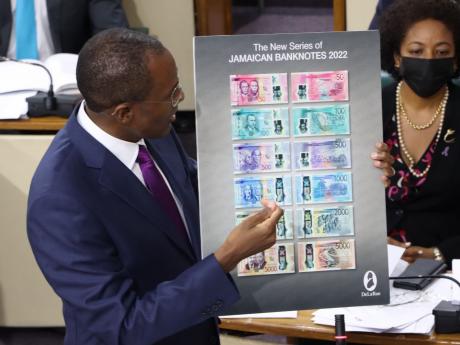 Minister of Finance, Dr Nigel Clarke, speaking in the 2022 Budget Debate in the House of Representatives. - Contributed photo.

In making the disclosure Tuesday afternoon in the Budget Debate, Finance Minister Dr Nigel Clarke stated that late former prime ministers and political rivals Michael Manley and Edward Seaga will appear together on the note.

Further, Clarke announces that the current notes are to be upgraded in the coming fiscal year.

He indicated that the new banknotes will last 50 per cent longer than the current ones.

Here's more on the new notes:

$50 note
National heroes Paul Bogle and George William Gordon, who were on Jamaica's original banknotes, but who today are on none of our banknotes, will appear together on the upgraded $50 banknote.

$100 note
National hero Marcus Garvey, who was on Jamaica's 50 cent banknote, but who is no longer on a banknote, will be restored and will appear alone on the upgraded $100 banknote.

$500 note
Nanny of the Maroons and Sam Sharpe will appear together on the upgraded $500 note.

$1,000 note
Sir Alexander Bustamante and Norman Manley who were on Jamaica's original banknotes will appear together on the upgraded $1,000 banknote when the new bills are issued.

$2,000 note
Political contemporaries Michael Manley and Edward Seaga will be on this new note.

$5,000 note
The images of former prime ministers Donald Sangster and Hugh Shearer will be on the new note.

Meanwhile, Clarke announced that the government is to provide $2,500 to the first 100,000 persons who enroll in the central bank's digital currency initiative.

Clarke held the attention of parliamentarians today as he publicly demonstrated the new JamDex digital currency.

Clarke electronically transferred to his barber $500 he said he owed for a haircut.