To mask or not 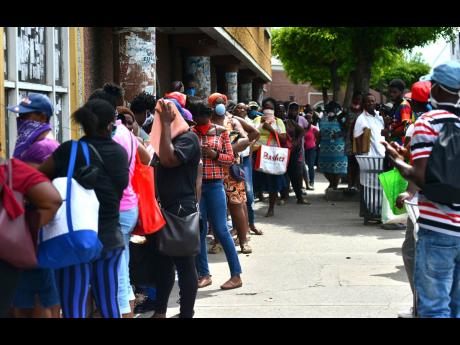 File
Under tight lockdown guarded by the security forces, two years ago Portmore was marked by social distance and mask-enforcement signs on almost all establishments, and the constant weariness of residents fearing the worst was at its most discriminate.

Under tight lockdown guarded by the security forces, Jamaica’s largest dormitory community was marked by social distance and mask-enforcement signs on almost all establishments, and the constant weariness of residents fearing the worst was at its most discriminate.

Today, however, the painted yellow footprints outside stores in Independence City, for example, have faded; and with them, too, the stringent doorway temperature checks and hand sprays by security guards.

For the most part, however, it doesn’t seem the municipality, scorched by the COVID-19 flames, is letting go of mask-wearing protocols any time soon – even as the Government has officially ended its mandates.

Jacqueline Bloomfield, a supervisor at the Portmore Mall Pharmacy, is happy about this. In fact, she thinks mask-wearing and sanitisation in stores should have remained mandatory.

“Excuse me, sir. Are you getting through?” asked Bloomfield cautiously, as she approached this unmasked reporter in the establishment last Friday.

Hers was among seven locations visited by The Sunday Gleaner team in a bid to gauge the mask-wearing stringency in the heavily populated municipality.

“If you don’t mind waiting at the front, I can go and get it (drug) at the cashier for you,” she suggested. “Otherwise, you can purchase a mask at the desk,” she continued, her tone preparing for a rebuttal.

Protests against the pharmacy’s insistence on mask-wearing are not uncommon, she noted later; a few customers have put up resistance before purchasing a mask. They are manageable, she argued, COVID-19 is not.

“We have not changed our protocols. Some customers have come in and said the mandate has been lifted, but still we try to stick to those measures as best as possible,” Bloomfield offered to The Sunday Gleaner when questioned.

“Some customers will get aggressive but we try not to go there with them.”

She continued, “Especially since this week; most of us would have seen that the second part of the Omicron (variant of COVID-19) is out. So we have stepped up the protocols even more,” adding that persons with all types of ailments visit the location, and thus sanitisation is done throughout the day.

One other pharmacy, two supermarkets, two wholesales and a clothing store were among the other establishments visited by The Sunday Gleaner team last week without a mask.

None of the others required the team to get one. When enquiries were made about their mask-wearing policy, the news team was waved in after sanitisation at all locations but one.

“It is not a requirement, but if you have it, you wear it still,” said one security guard at a supermarket in the Portmore Mall.

Inside, most customers wore masks, while the side stares were evident for the few who didn’t.

“The Government can drop the mask ‘cause him vaccinated. But I’m not; so I’m wearing my mask,” said shopper Krissy-Ann Walters, laughing as she cited distrust for Government for not getting vaccinated.

“People must still wear them mask. I think so because COVID still going on. It feel weird now fi see people without them mask in public,” she continued.

Norman Walker, board chairman of the Portmore Mall and president of the Sunshine City Chamber of Commerce, does not see the uneasiness about not wearing mask changing any time soon.

“I don’t think that will change for now. Apparently, the two years have sort of formed a custom to the mask-wearing in people. It has become a part of them now, although the mandate has been lifted,” he pronounced, noting that many businesses are still adhering to those protocols.

Two years ago, at least a dozen establishments at the complex were forced to close their doors due to the pandemic and lockdown restrictions. Some have reopened, but Walker said “it’s still early days” to determine if they are bouncing back.

In the interim, at least one store inside the mall has abolished all COVID-19 protocols. There was no sanitisation or temperature check upon entry, nor was there any mask requirement.

A handful of customers milled about, the news team sticking out among the majority wearing masks.

One mask vendor in Portmore told The Sunday Gleaner that masks were still in demand.

“People are still buying them because most of the places you go nowadays asking you to wear one to come in,” he said.