NHT workers walk off the job 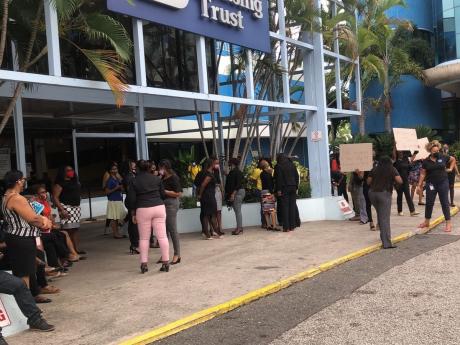 Employees protesting at the headquarters of the National Housing Trust in New Kingston on May 13, 2022. -Kimone Francis photo.

Workers at the National Housing Trust (NHT) in New Kingston this morning walked off the job in protest over an outstanding job evaluation and reports of an expected redundancy exercise.

The workers have also taken industrial action over what they say is the management's reluctance to increase benefits.

Similar protests are being carried out by NHT workers at other locations.

“When the Government announced the 4% increase it said who could do better than that should. The NHT just wants to give us the 4% even though our union came to them with 10 areas where we could get additional benefits,” a source at the state-run entity said.

The source said the union had proposed, among other things, adjustments in loan terms for staff, an increase in transportation payments and travel allowances, and lunch subsidies.

“Every time our union meets with them dem aggo round we and saying dem nuh get any approval from the finance ministry. So basically they had the meeting yesterday and management still didn't come with anything for us. To this day we don't get the 4% increase. So we not continuing without it,” the source told The Gleaner.

Additionally, the source said that a job evaluation, done in 2018, remains outstanding and that no word has been given on its implementation.

The workers are the third group of civil servants to walk off the job.

On Tuesday, more than 2,000 National Water Commission workers took strike action, demanding action from the Government over an outstanding reclassification from 2008 and their non-inclusion in the ongoing review of public-sector compensation.

Yesterday, air traffic services were disrupted when controllers walked off the job to register their frustration with the government over protracted salary issues.