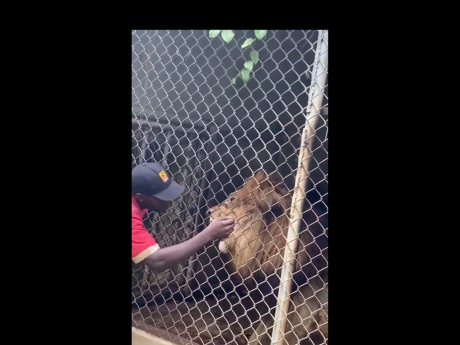 A screengrab of a viral video showing a man touching the lion's mane shortly before he was bitten by the animal at the Jamaica Zoo recently. Jamaica Zoo has identified the man as a contractor and called the incident "tragic."

Jamaica Zoo Attractions Limited has issued a response to a viral video showing a man being bitten by a lion at the St Elizabeth-based attraction.

In a release this afternoon, the zoo, which identified the man as a contractor, called the incident "tragic" and said that his actions were not in keeping with the entity's safety procedures and policies, which "must be adhered to at all times at Jamaica Zoo."

"We are currently reviewing the video, with a view of preventing any future recurrences," Jamaica Zoo said. "It is an unfortunate event that should never have happened, and we, the family of Jamaica Zoo, are doing everything to assist the gentleman in moving forward."

The company did not confirm when the incident happened.

The video shows the man placing his hands in the mouth of the lion, while people, believed to be patrons, can be heard commenting on his actions in the background in disbelief. The lion then holds on to the man's hand, while he vigorously tries to remove it.

It was later reported that he lost a digit during the attempt.