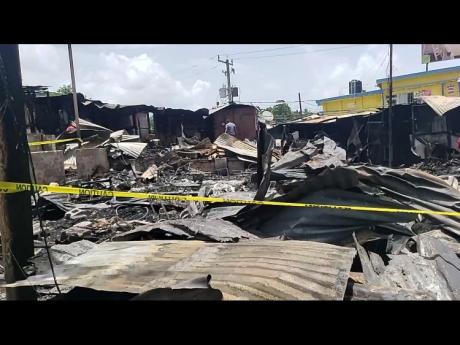 A screengrab shows a section of the Morant Bay Arcade in the capital of St Thomas after it was destroyed by fire this morning (Nicholas Nunes video).

Micro-business owners in Morant Bay, St Thomas are assessing their loss after a large section the Morant Bay Arcade on Queen Street in the capital was razed by fire early this morning. The incident occurred about 6:00 a.m.

Raymond Thomas said he lost the contents of three shops, which included a cook shop, and a barber shop and hairdressing salon. He estimated his losses at about $3 million.

“We lose a lot of things. Machine mash up- everything,” he said.

It's unclear what started the fire, but he believes it may have been caused by an electrical issue.

“Is bear pressure here now. Pressure burst pipe man. Pressure we under now,” he bemoaned as spoke to reporters and rummaged through the burnt contents.

He had been operating in the arcade for more than 15 years and it was his only livelihood, he said. Notwithstanding, Thomas, who also goes by the name 'Muta King' remains hopeful.

“We still have to try and survive. Still have to do barbering same way,” he said. “The barbershop don't really burn down, just the wire them burn off, but everything else that was here gone down flat.”

Rose, who operated a cook shop, arrived at the location, after receiving the news about the fire, to find fire fighters trying to contain the blaze. In the end, her shop was flattened.

“I lose everything!” she exclaimed, as she spoke to The Gleaner.

“It is a very big loss for me, and in recent days I get new stuff in it- a four burner gas stove and some more big pot- and everything go down for me. Everything,” she said.

She had been operating in the arcade for more than two decades, selling clothes alongside her cook shop. “So me lost me clothes them as well too,” she related.

She does not know yet how she will piece it all back together.

“Probably me just have to pick up bits and pieces and with help from somebody and go along again. But right now I tell you, it's so shocking, so stressful to know that everything that you put in place gone in a tip of a moment, so it's like I don't even know what to say,” she told our news team.

An investigation is ongoing to determine the cause of the fire.