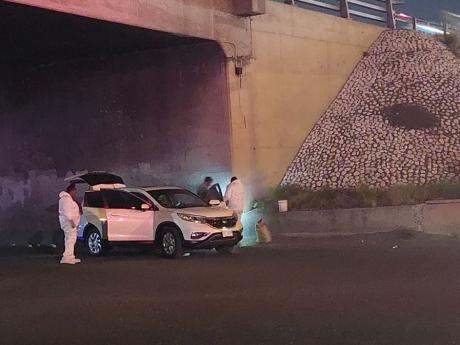 Police investigators process the scene where Jamaica Labour Party politician Lennox Hines was fatally shot by men travelling on a motorcycle along Marcus Garvey Drive in Kingston on Thursday.

Minister of Local Government Desmond McKenzie has strongly condemned the murder of councillor-caretaker for the Southboro Division in St Catherine Lennox Hines.

Hines was gunned down along Marcus Garvey Drive in St Andrew last evening.

“This is absolutely brazen and brutal. While the motive for this heinous crime is yet unknown, it is clear to me that these criminals who shot Mr Hines down in the evening traffic on Marcus Garvey Drive wanted to make a public show of the evil that they committed,” said McKenzie.

“It is another terrible example of the violence that is afflicting our society, and the combined determination of the security forces and ordinary citizens right across the country is critical to turning this situation around,” he added.

Hines served as councillor-caretaker for the division since 2014.

According to McKenzie, he proved to be an enthusiastic and dedicated student of the system of local government and the fixity of purpose required for effective service.

“He was the embodiment of sincerity in service, and he was waiting for the opportunity to become their official representative. Sadly, he has been savagely torn away from his family and from the wider community. I pray for comfort and healing for his family in the difficult days to come, and I hope and trust that his killers will be brought to justice.

He expressed sympathies to his family and colleagues.

He called for the perpetrators of the murder to be swiftly brought to justice.