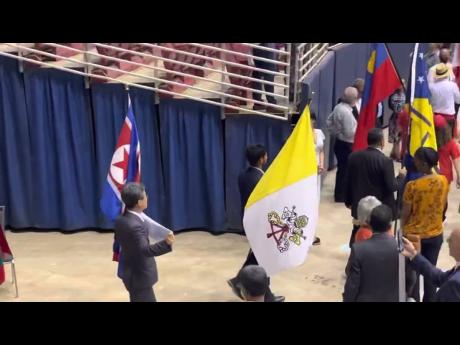 The Vatican flag was flown at the Seventh-day Adventist’s (SDA) 61st General Conference (GC) Session in St Louis, Missouri (MO) on June 11. While some church folk are okay with it and have offered stout defence, other members of the church are raising a red flag against the Vatican flag. A vibrant discussion continues to take place across all social media platforms.

One group making its voice heard loudly is Advent Messenger, which has its own online portal, which it says, “provides news and commentary on current events, top stories, social trends and political and religious events”.

In a press release on openpr.com Advent Messenger stated: “The Vatican flag represents the spiritual and political power of Pope Francis and points to the headquarters of the Roman Catholic Church, the seat of the beast (papal power). On Sabbath, June 11, 2022, the Vatican flag was flown during the Parade of Nations event at the conclusion of the 61st General Conference Session in St Louis, MO, the Seventh-day Adventist Church’s most important conference. According to Ted Wilson’s explanation to the world session, the banner of Rome was flown to depict the nations not yet reached.”

Advent Messenger then quoted, somewhat ominously, from The Great Controversy, a treasured book written by the SDA’s acknowledged prophetess, Ellen G White: “When the idolatrous standards of the Romans should be set up in the holy ground, which extended some furlongs outside the city walls, then the followers of Christ were to find safety in flight.” (Great Controversy, p. 26).

Ted Wilson, who is the president of the SDA church worldwide – and who gained re-election on June 6, the first day of the 2022 GC Session – is a spiritual leader who, like many others, attracts both praise and criticism. His supporters have come out swinging, while denouncing Advent Messenger.

Under an Advent Messenger YouTube post of the flag-bearer carrying the contentious Vatican flag, one person stated: “This spirit of diverting attention from the achievements of the session is very unfortunate. Your ministry has turned into an ‘opposition political party’ in certain regions of this world where statements are carelessly uttered. What are you preaching here apart from turning away those that admire and are blest by our teachings and the way this Church has been blessed. Your ministry will be irrelevant, no wonder you ‘quarrels’ with a named ministry. Share hope and engage the leadership where you think you are not heard. Pray for the Church and its leadership. We have work to do than just spend time criticising.”

Another person wrote: “You do know that the Vatican is a country right? Just like all those other flags are representing countries. Sometimes we read way too deep into things and find controversy where no controversy is. Most times, the most obvious answer is the right one.”

A group calling itself Total Student involvement warned: “Advent Messenger, your main aim is to find fault in the GC. If that is your aim, you failed. Don’t allow the devil to use you.”

One church member noted, “The Vatican flag (North Korea etc, etc) and other country flags were there to showcase countries that still need to be brought the Lord’s message. You have to add more context next time, Advent Messenger.”

In direct response to this comment, one person stated, “There is no place for this. This is a GC for the SDA, not the world. Imagine if people brought in idols of other gods to the sanctuary in the Old Testament and it was a sign showing those people who still needed to be converted. Flags are there to be a representation of something or someone. The flag takes their place and represents them. Were there other flags of nations that already have SDA in them, or were they only flags present specifically representing places that SDA has not reached yet?”

In support of Advent Messenger was a GC delegate who had a rather lengthy comment, which is shared in part: “Our Lord and Saviour has given his faithful a command blow the trumpet in Zion, lift up a standard: I’m saddened by those who seek to silence error. Are we now a people that see evil but call it good? Anyone with Biblical sense know that the flag flying is only one of many issues with the GC session. Yes, it was lovely the amount of souls that are being reached. Does that mean it negates the direct abuse of power from the chair, undersecretary and Ted Wilson? No, it does not. They are not the sole speakers for the Church. This is not tyranny. We vote as delegates. We speak on matters that may effect the Church in a negative or positive way. We are headed for Jacob’s trouble and we must come before the Lord and pray for these subtle demonic influences that have entered the church. This session showed us how far we have fallen. The good that has happened will be lost if more don’t speak up.”