‘Conservation is of paramount importance’ 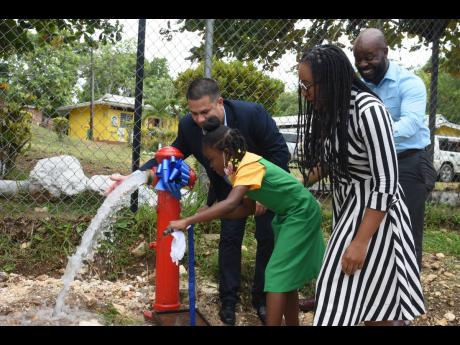 Ashley Anguin
From left: Matthew Samuda, minister without portfolio in the Ministry of Economic Growth and Job Creation, takes part in a symbolic turning on of a water hydrant during the official commissioning of the Baron Hill to Samuel Prospect Pipeline Replacement Project in Trelawny. The event was held at the Brampton Primary School. Also pictured (from second left) are Kiara Mullings, Brampton Primary School student; Tova Hamilton, member of parliament, Trelawny Northern; and Herman Fagan, National Water Commission’s regional manager for St James and Trelawny.

Jamaicans are being urged to practise water conservation, where possible, amid forecasts of below-normal rainfall levels for this year and notices of scheduled water disruptions as the National Water Commission (NWC) prepares for potential drought conditions.

Speaking to journalists following Thursday’s official commissioning of the NWC’s Baron Hill to Samuel Prospect Pipeline Replacement Project, at the Brampton Primary School in Brampton, Trelawny, Herman Fagan, the utility company’s regional manager for St James and Trelawny, said that while drought-mitigation measures have been implemented in the western region, customers must still play their part to prevent water loss.

“It is not a matter of being fearful, but what we encourage our customers, whether there is drought or not, is that conservation is of paramount importance. The fact of the matter is that we are now going into the period where we have drought conditions, but based on the predictions, we are in good stead so far,” said Fagan.

“The good thing about it is that, based on the measures we are putting in place, it is kind of offsetting and mitigating some of the possibilities that lie ahead. The Great River Plant (in St James) is looking extremely well, and, in fact, we effected some emergency repairs there about a month ago, and based on our projections, we are seeing an increase of maybe 1.2 million gallons a day going into our major reservoir,” Fagan said.

Earlier this year, the Meteorological Service of Jamaica reported that nine parishes recorded below-normal amounts of rainfall in January, with dry conditions being projected at that time to range between moderate and near-normal through to the beginning of the wet season in April.

“What we are basically imploring those customers to do is to practise proper conservation measures, because, based on where the reservoir and dams are, it is basically trending downwards, not at a very fast rate, but notwithstanding, it is still cause for concern. What we will do is ensure that the requisite communication is done, so that if and when we need to have lock-offs or anything of that nature, they are properly advised in advance,” said Fagan.

Matthew Samuda, the minister without portfolio in the Ministry of Economic Growth and Job Creation, had suggested on Thursday, June 16, that the Government may need to implement policies to force Jamaicans to get more involved in the country’s water security, in order to secure sustainable access to adequate water supply.

Concerns about Jamaica’s water security had previously been raised in 2014 by Dr Michael Taylor, director of the Climate Studies Group at The University of the West Indies, Mona, following a bout of rain which ended prevailing drought conditions during that year’s summer period. At that time, Taylor said that Jamaicans must be mindful of climate change, which would see the island experiencing longer and more severe dry spells over the long term.