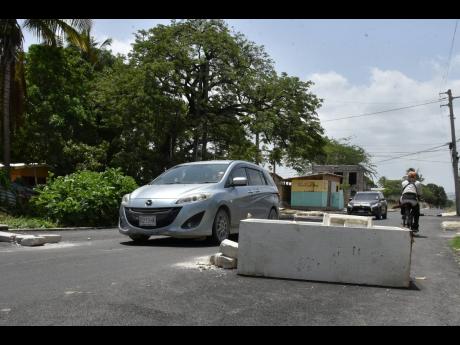 Kenyon Hemans
A section of the freshly paved Valdez Road, off Old Harbour Road, St Catherine, showing blocks and other devices used to slow the speed of motorists. 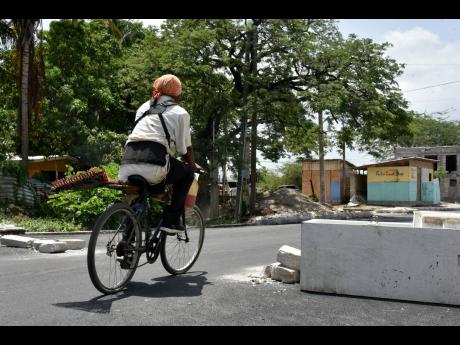 Kenyon Hemans
A cyclist navigates his way around boulders mounted by residents along Valdez Road in St Catherine.
1
2

The fresh tyre skid marks along Valdez Road, off Old Harbour Road in St Catherine, is proof of speeding motorists through the community. This has caused disgruntled residents to erect blockades on either side of the roadway to force undisciplined motorists to slow their speed to ensure the safety of the community’s children.

The roadway, which was rehabilitated a few weeks ago, has eased the long-standing frustrations of residents over the previously poor road infrastructure.

The rehabilitation project, which was repaired as part of a National Housing Trust (NHT) programme to upgrade existing housing scheme roads it built, came at a cost of approximately $30 million.

“We appreciate it y’know but we just can’t tek di speed weh di man dem a drive,” one resident told The Gleaner. He added that the motorists who engaged in this conduct were not only taxi drivers, but also those driving their personal cars.

Residents argue that it is the smooth roads that have enticed unruly drivers and are pleading for a sleeping police to be installed to slow traffic. They said that this would also deter gangsters from carrying out drive-by shootings and other illicit activities, as it would be difficult for them to flee the area.

“The pickney dem nuh safe, you see yesterday (Sunday) ... him almost lick dung one pickney,” another resident said of a motorist, stressing that a child had miscalculated the speed of the approaching motor car.

No one would drive fast in the area when the road was littered with potholes previously, he added.

“All me as big man, me come out and a walk out and not even realise say car reach me ‘cause me used to them a slow down,” the resident said.

Member of Parliament for St Catherine South Central Andrew Wheatley agreed that the device is necessary, and said he will be meeting the National Works Agency to examine the feasibility of its installation.

“They have been crying over the years for their roads. In fact, the roads have been a deplorable condition some ... thirty years now,” he said.

Roads in Cromarty Grove and Bellevue Heights were also upgraded at a cost of $30 million. Locals now breathe a sigh of relief.

Wheatley stated that further work is scheduled to be completed within the constituency and that Valdez Road, which connects the constituency’s two main roadways, Old Harbour Road and St John’s Road, is currently under repair.

He stated that the first phase of the works was completed last week and that the project will cost $31 million under constituency allocations.

Wheatley said he is now awaiting funding for Featherbed Lane and Clayton Heights after the NWA conducts an estimate.