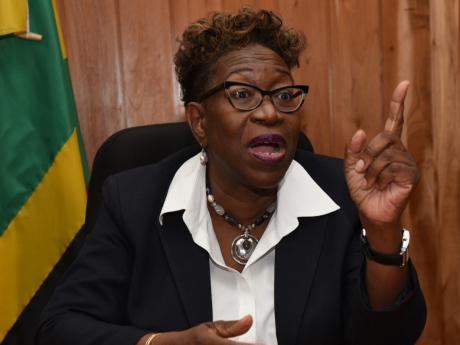 "This young boy is a serpent and he knew exactly what he was doing": Llewellyn.

WESTERN BUREAU: The jury hearing the indictment of rape, buggery and murder against a 17-year-old boy has received instructions from Justice Courtney Daye ahead of retiring to determine a verdict.

Justice Daye, who is hearing the matter in the Westmoreland Circuit Court, told the jury that they should consider all the evidence before arriving at their verdict.

"You can't determine the outcome of this case based on one item of evidence because it consists of several pieces of evidence," Daye cautioned.

He also told them "You must decide who had the sole opportunity. The accused told you that two other men were there. That is for you to decide.”

In her closing summation, Paula Llewellyn, Director of Public Prosecutions (DPP), described the accused as a habitual liar.

"He is telling lies to try and cover up his actions and it is an indictment on him and his family in the way they have raised him," Llewellyn said.

Four years ago, the accused, then 13, allegedly raped, buggered and murdered a nine-year-old school girl.

"The prosecution is saying these crimes were committed by the accused. He has developed the art of lying. You should believe him when he said he had sex with the victim," the DPP urged the jury.

"But he is telling lies on ... and another man who he claimed had a machete and a gun and who had sex with the victim."

Llewellyn pleaded with the jury, "Do not allow him to get away with it, he must take responsibility for what he did. Nobody else was there, other than him and the victim when he sexually assaulted and then murdered her.”

The DPP described the scene of the crime as that of the biblical Garden of Eden, while painting the accused as a serpent who devoured the victim.

"This young boy is a serpent and he knew exactly what he was doing," noted Llewellyn.

"Reject what he had told you about these two men. Don't allow him to get away with this crime."

According to the prosecutor, the accused's parents were afraid of becoming victims of jungle justice so they took him to the police station on the night the victim's lifeless body was found in bushes, "it was not because he was owning up to any responsibility."

On Wednesday, the defence closed its case, hours after the accused, in an unsworn statement, admitted having sexually intercourse with the victim but only after he was threatened and forced to commit the crime against his will by a man who he said was wearing a mask and carrying a short black gun.

Earlier during the trial, Dr Judith Mowatt, head of the Institute of Forensic Science and Legal Medicine, testified that the method by which semen could enter the anus would have to be done by a penis, normally an erect penis.

The prosecution, led by Llewellyn and supported by Loriann Tugwell and Rennelle Morgan, is alleging that on June 5, 2018, the nine-year-old girl was sexually assaulted and killed by a teenager, who was 13 years old at the time and lived near the victim, after she accepted his invitation to pick apples as they walked home from school.

Dave Brown and Denley Saddoo are the defence lawyers.

The trial will resume at 10.30 tomorrow morning.