Riverton City dump to be closed 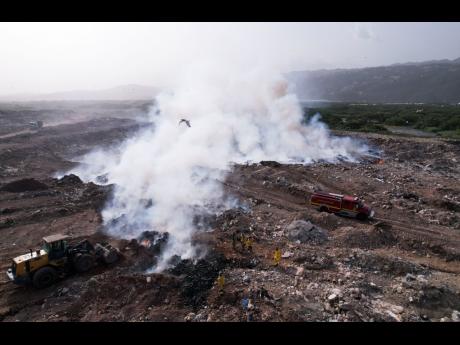 Holness said a comprehensive review of the management of garbage collection had been conducted and pledged that his administration will solve the crisis with public sanitation. - Ricardo Makyn photo

The Riverton City dump in St Andrew will be shut down, Prime Minister Andrew Holness has announced.

He did not give a timeline.

The facility is Jamaica's largest garbage disposal site and is notorious for its mystery fires and persistent health concerns.

Holness says by September, he'll meet with Anthony Hylton, MP for the area over the move.

Hylton is the MP for the St Andrew Western constituency where the facility is a key source of income for many residents.

“This is something that the political class will have to work together on; It is not a simple matter of say 'we are closing down Riverton City',” Holness said during an address at a joint sitting of the Houses of Parliament to mark 60 years of political Independence for Jamaica.

He said a comprehensive review of the management of garbage collection had been conducted and pledged that his administration will solve the crisis with public sanitation.

Holness said the government will seek greater participation from, and partnership with, the private sector in waste collection, the introduction of waste to energy conversion, the commissioning of new properly constructed disposal facilities and the decommissioning of numerous landfills.

For decades concerns have been raised about the location of the Riverton disposal site close to several residential neighbourhoods. On numerous occasions it posed a health risk owing to the stench and several fires.

The latest blaze occurred in July.