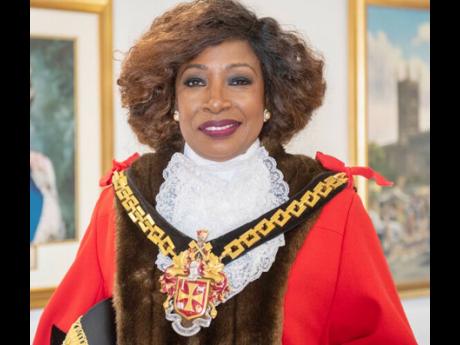 A Jamaica-born councillor recently appointed as mayor of Wolverhampton has vowed to assist charities that serve African Caribbean communities in the United Kingdom (UK).

Sandra Samuels recently overturned over 200 years of British history by becoming the first person of African Caribbean heritage to become the mayor of Wolverhampton, in the west Midland region of the UK.

The Montego Bay-born councillor supports three charities, including The African Caribbean Community Initiative, which meets the needs of individuals who are victims of mental illness, along with their families.

Samuel also assists Compton Care, which provides care and support for the terminally ill, and the Wolverhampton Sickle Cell and Activity Centre.

Speaking exclusively to The Weekly Gleaner the newly appointed mayor said: “These charities are close to my heart because traditionally, there have been gaps in the excellent service they provide to the community because of having a poor profile and lack in funding.

“A few years ago, my sister was diagnosed with leukaemia, and it was felt she didn’t have a long time to live. I appreciate the work of organisations like Compare Care, who make a difference in the lives of the terminally ill.”

Samuels worked in the British health service for 40 years as a nurse, theatre sister, and manager. She has also been a trade union official, school governor, community activist, and volunteer.

The Jamaican was also awarded an Order of the British Empire in 2015 for services to local government and politics.

When Mayor Samuels was asked why it had taken over 200 years for an African Caribbean mayor to be appointed in Wolverhampton, she explained that individuals were often invited to the role only after serving as councillors for extensive periods.

Samuels said: “I am one of the few Caribbean African councillors in recent years who have completed two terms in office, in Wolverhampton. Fortunately, I have passed the test of time.”

The mayor’s achievements are particularly remarkable given the challenges she has faced during her career in politics and the NHS. She has been involved in a catalogue of potentially damaging unsubstantiated allegations.

“I have been reported to the police, investigated, and been subject to scores of NHS disciplinaries during my working life in the UK,” says the new Mayor.

“Fortunately, I have courageous parents who taught me how to be a good citizen and how to find my moral compass. Support is also especially important, and I have always had a good support network with my husband and community.”

The first two months of the mayor’s appointment have been highly active. She has visited countless communities and schools, attended prize-giving events, flag-raising ceremonies, a World War I memorial and even a car-washing occasion to raise money for a charity.

The 65-year-old admits that “the life of a councillor is busy”.

Speaking to The Weekly Gleaner, Samuels explained why she remains positive. She said: “Holding the office of mayor is one of the highest honours in Britain.

“I have the responsibility to represent and promote the well-being of Wolverhampton as its ambassador.

“I want children to think the city represents their community and (that) they can aim high in life. As a ten-year-old in Jamaica I never thought it was achievable to become a doctor. My appointment is critically important because it can help to overturn negative preconceptions as to what is achievable.”