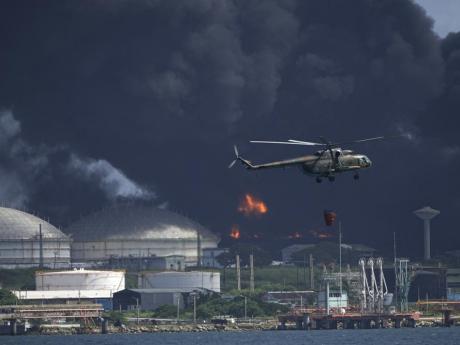 A helicopter carrying water flies over the Matanzas Supertanker Base as firefighters try to quell the blaze which began during a thunderstorm the night before, in Matazanas, Cuba, Saturday, August 6, 2022. Cuban authorities say lightning struck a crude oil storage tank at the base, causing a fire that led to four explosions that injured more than 50 people. (AP Photo/Ramon Espinosa)

HAVANA (AP) — A deadly fire that began at a large oil storage facility in western Cuba spread Monday after flames enveloped a third tank that firefighters had tried to cool as they struggle to fight the massive blaze.

At least one person has died and 125 are injured, with dozens of firefighters reported missing ever since lighting struck one of the facility's eight tanks on Friday night.

“The risk we had announced happened, and the blaze of the second tank compromised the third one,” said Mario Sabines, governor of the western province of Matanzas where the facility is located.

The governments of Mexico and Venezuela have sent special teams to help extinguish the fire, with water cannons, planes and helicopters fighting the fire from several directions as military constructions specialists erected barriers to contain oil spills.

Local officials warned residents to use face masks or stay indoors given the billowing smoke enveloping the region that can be seen from the capital of Havana, located more than 65 miles away.

The majority of those injured were treated for burns and smoke inhalation, and five of them remain in critical condition.

A total of 24 remain hospitalised.