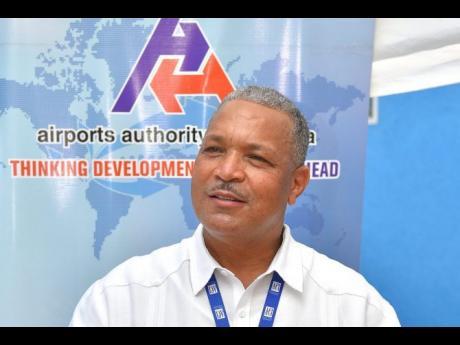 President and Chief Executive Officer of the Airports Authority of Jamaica, Audley Deidrick.

The Airports Authority of Jamaica (AAJ), operator of the Ian Fleming International Airport in Boscobel, St Mary, is to undertake a security review arising from the major cocaine bust at the facility.

Yesterday, personnel from the Narcotics Division and Counter Terrorism and Organized Crime Division carried out targeted operations at the airport and seized 10 bags containing a total of just over 1,100 pounds of cocaine.

The police say the cocaine has a value of US$25 million or J$3.7 billion.

No one was arrested during the operations, with the investigation ongoing.

Deputy Commissioner of Police Fitz Bailey told The Gleaner that local lawmen worked in conjunction with Drug Enforcement Agency (DEA) in the United States and Canadian law enforcement to conduct the operations.

Despite this, he said the drug bust has prompted the agency to take a closer look at security at the airport.

Deidrick said as an international airport the facility is required by regulation to abide by established security measures and protocols.

“And I would go further to say that because we are also looking to establish operations in the United States, we're also having to ensure that we are utilising measures that meet the requirements of the TSA (Transport Security Administration) of the United States,” Deidrick added.

According to Deidrick: “When an incident like this happens, in the same way that when 9/11 happened in 2000 it caused the aviation industry - airlines, airports - to look at their security measures and to see where, if any, improvements can be made then I would say with all honesty in a matter like this, as the operator for that airport, we will use the opportunity to look if there are any ways that we need to take any further improvements to our security system.”

The Ian Fleming International Airport was upgraded from the Boscobel Aerodrome in January 2011, with further expansion in March 2018.

On June 16 this year, the airport welcomed its first scheduled international flight with the arrival of a 30-seater InterCaribbean Airways airplane from Providenciales, Turks and Caicos.