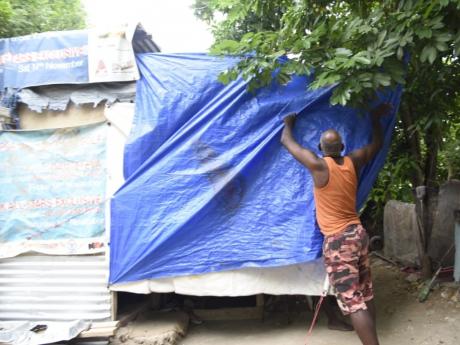 Horace Record, a resident of Passion Garden in rural St Andrew, secures a tarpaulin to his home on September 24, 2022, as he made preparations for Tropical Storm Ian. – Nicholas Nunes photo.

“The storm actually a come?" a resident of Shooters Hill in St Andrew declared to our news team when asked about preparations for Tropical Storm Ian.

The rural community is known to feel the brunt of storms and is prone to landslides.

But, despite this, some residents say they are not prepared and are hoping for a last-minute miracle.

The former garbage collector said he has no money to prepare for the storm as a broken arm has caused him to be unable to work for over a year now.

"Mi nuh have no money fi go buy nail and dem sumn deh. Ah one year and odd now my hand bruk and I don't work," he said.

But he is still doing what the can, even if it's just using stones and bottles filled with water to secure his roof.

"Mi ah try do whatever mi can do fi now," he said.

Another resident in the community lamented the cost of ply boards and told The Gleaner that this is why he has not been able to undertake work to his house.

He is appealing for his Member of Parliament Juliet Holness to step in and help.

"I don't know of anyone in the community who got any help. Not even the needy and the vulnerable, and dem nah go know the needy and vulnerable till after this happen and it tumble over," he said.

Further in the community, in a one-bedroom dwelling, Romario Morrison, his two siblings and his stepfather are anxiously awaiting the storm.

They are aware of the risk associated with the system.

Just two years ago, flood rains caused a major landslide that killed his 42-year-old uncle and his 15-year-old cousin.

"Any breeze wi fret," he added.

But, he said the family has not considered the option of going to a shelter.

"Only thing wi can do a buy food and we buy gas, and buy candle and kerosene oil, and pray fi wi one a neda," he said.

Meanwhile, Roy Gordon was seen making sales of vegetables and ground provisions from his car in the community.

He told The Gleaner that after doing business he will be able to buy the things he needs to prepare for the storm.

Over in Weise Road in Bull Bay, residents fear that the Chalky River banks currently packed with dirt could be breached and cause major flooding again.

However, 72-year-old Coreen Merchant, who lives alone in her one-bedroom house, said she will not be seeking help to go to a shelter, but she needs help to buy food.

"I don't have no food or nothing in this place. Mi nuh see nuhbody from mi hear seh storm a come," she said.