Power outages to prolong in some flood-hit communities, says JPS 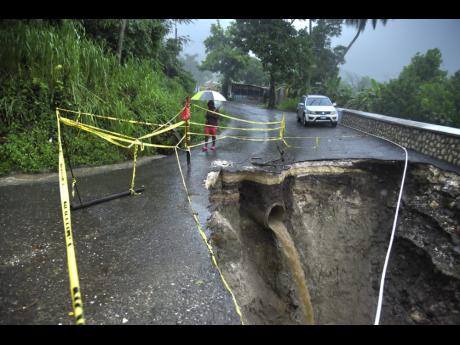 A land slippage claims a section of Suttons Square, Clarendon, rendering it unsafe for vehicular traffic. Residents said that the breakaway occurred a month ago and worsened with Monday’s storm rains. -Nicholas Nunes photo

Electricity provider, Jamaica Public Service Company (JPS), says customers in parishes hardest hit by Monday's flooding should prepare for prolonged outages because its crews are having problems accessing some communities.

"JPS is asking for patience and understanding," the company said in a statement Tuesday morning, updating on the impact of the rainfall associated with Hurricane Ian.

Power supply to several communities in Clarendon, St Catherine, Manchester and St Andrew has been disrupted because of downed utility poles and fallen trees linked to the heavy rains from Hurricane Ian.

"JPS crews have been badly hampered by the adverse weather conditions affecting the southern and eastern parishes," JPS said.

It added: "Work has been delayed by flooding, blocked roads and lightning activity. Particularly in Clarendon, roadways leading to affected communities have been blocked, namely the access routes via Pedro River, via Aenon town and other corridors. The company says residents should prepare for prolonged outages – even as crews do their best to overcome the significant hurdles."

JPS said its teams are also facing difficulties in St Catherine and Manchester, where several poles were uprooted and washed out.

In rural St Andrew, teams attempting to restore Bowden Hill, were forced to halt due to the deteriorating conditions.