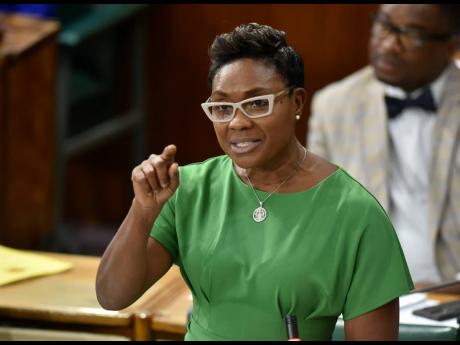 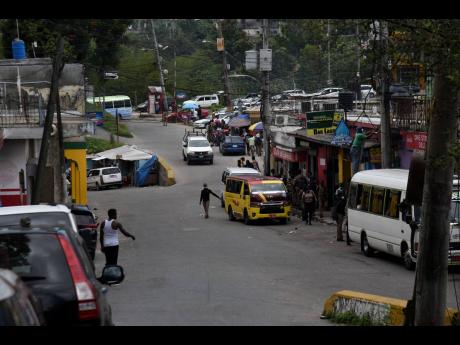 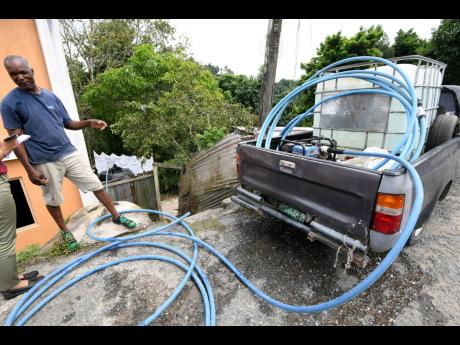 Rudolph Brown
A resident of Lawrence Tavern buys water from this informal vendor who drives around with a tank in a pickup to assist with easing the water shortage in the area.
1
2
3

“To allow for West Rural St Andrew to prosper, focus must be placed on water, roads, security and access to proper infrastructure,” she said in her contribution to the State of the Constituency Debate in the House of Representatives on Tuesday.

The second-term MP said it is no secret that her constituency suffers from “major water woes”, which includes frequent water lock-offs that extend for days and even months.

Since she was elected in 2016, Cuthbert-Flynn said she has made access to water a priority, with the recent building of a community tank and the upgrading of a pumping station that will assist with boosting the water supply in the Cavaliers area.

The MP added that tanks will be purchased for Cavaliers district and Mount Airy in the Brandon Hill division, which will serve residents and those in the surrounding areas of Mount Prospect, New Garden, Mount James and Mountain Spring.

“I am happy to also state that we will be seeing the upgrading of pipelines in the areas of Padmore in the Red Hills district ... There has been great efforts by the National Water Commission to upgrade pipelines across the constituency as well as focus on the metering of new customers, and I welcome these efforts,” she outlined.

Cuthbert-Flynn told Parliament that the $800-million Essex Hall water project, which will fix the long-standing water crisis in Lawrence Tavern, from Burnt Shop to Border, is on track.

She said upon completion, it is expected to produce 0.75 million imperial gallons of potable water per day, which will serve approximately 20,000 residents.

“Water to all these communities must be a priority for sustainable development and I look forward to more communities being upgraded with larger pipelines and consistent water supply,” she said.

Meanwhile, the MP said her constituency has a wide network of roadways which are heavily traversed daily and are in a terrible state.

She said patching of several roads has been undertaken in all four divisions and since her presentation last year, an estimate of $103.6 million has been prepared for the complete rehabilitation of the Mount Salus to East Kirkland Heights roadway in Red Hills.

Cuthbert-Flynn, who is also state minister of health and wellness, assured her constituents that their complaints have not fallen on deaf ears and committed to continue lobbying on their behalf.

She called on the Government to ensure that the complete rehabilitation of the major thoroughfare from Manor Park to Toms River, St Mary, is included in the plans for the next financial year.

“This roadway is a major network and doesn’t just pass through my constituency, but connects five members of parliament in this house to their constituencies,” she emphasised.

The MP named the following roadways as being in need of attention: Belvedere in Red Hills, Seaview Road in Stony Hill, Temple Hall to Border to Lawrence Tavern Square and Mount Ogle to Tavern. She added that all Jamaica Urban Transit Company (JUTC) routes are in need of “serious attention”.