Principal Harris determined to put her students on top 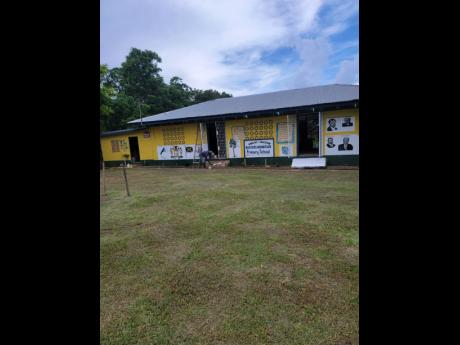 Contributed
Baxter’s Mountain Primary School is located in the hills of St Mary. 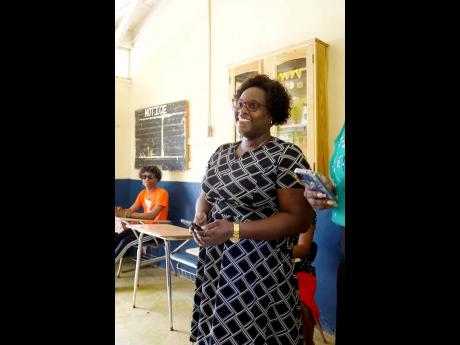 Contributed
Sherene Harris, principal of Baxter’s Mountain Primary School, is all smiles as she enjoys the Haffi Mek It School Tour. 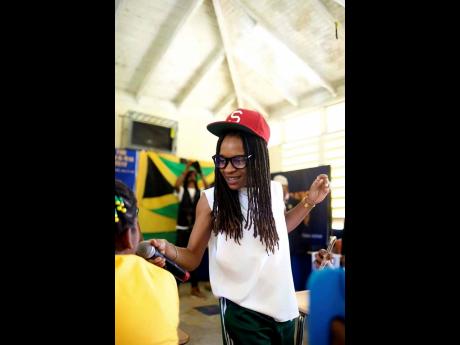 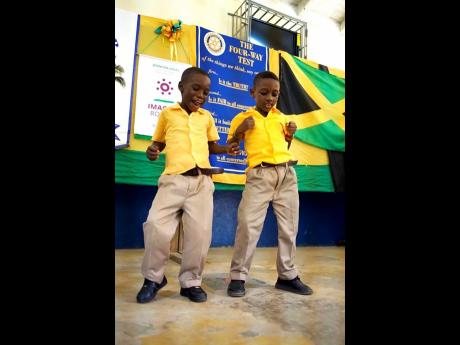 Contributed
These two lower school boys were only too delighted to perform when Koffee’s Haffi Mek It School Tour made a stop at Baxter’s Mountain Primary School in St Mary in September.
1
2
3
4

Top of the wish list for Sherene Harris, principal of Baxter’s Mountain Primary School in St Mary, is a literacy room for her students, who range from grades one to six. That wish is very closely followed by Internet connection, computers and tablets, as well as a breakfast programme. And then, there is transportation, which is a headache.

However, Harris, who was appointed principal effective September 2022, is undaunted in the face of these challenges. Coming straight from Annotto Bay High School, located in the same parish, to her little school in the hills with a population of 60 students and four teachers required some adjustment. But her attitude proved so positive and upbeat that when Grammy Award-winning reggae artiste Koffee and her team visited earlier this month, they were totally bowled over. So much so that they sent a letter to The Gleaner.

It stated in part: “I wanted to share a pitch with you on a story that I think is just so heartfelt. As you may be aware, the Haffi Make It School Tour has returned for its second staging. This year, the tour included primary schools for the first time and one such primary school that we visited in St Mary, called the Baxter’s Mountain Primary School, has an interesting story. The newly appointed principal Miss Sherene Harris is from the community and fits up to nine students in her Toyota car, as transportation is a major issue in getting the kids to school. Also, they have no Internet or computers. It’s interesting how dedicated the principal is, and I would love to know if there would be any interest in interviewing her?”

Harris, when contacted, was the soul of modesty. “I only do what is right. One of the greatest rewards for us as educators is to know that we have impacted a life. If you don’t love children, don’t get involved.”

“How could I pass my children on the road and then reprimand them for reaching school late?” she asked in response to her using her vehicle to transport the students. “The road from Annotto Bay to Fort George is very bad, and transportation is a problem. We have a fording, and when it rains, it is impassable. We once had a bridge, but that broke down, so we really need it back.”

Regarding the actual teaching experience, Harris had to explain how exactly a school with six grades operates with four teachers. Simple. The classes are doubled up.

“So, we have Grades one and two together; three and four and five and six. With four teachers, two are assigned to lower school [Grades 1 - 3] and two to upper school [Grades 4 - 6]. The school once had a population of 12 students, but the principal, Valerie Walters, brought it up to about 70. Baxter’s Mountain Primary has a lot of potential, and we are going to make great things happen here,” Harris vowed.

She is currently in dialogue with the Digicel Foundation regarding getting Internet connection, and she has used her resourcefulness to pack barrels with school supplies that she knows her “children”, as she calls them, will need.

“I took a trip overseas, and with the help of good friends, we were able to get some things for the school. The Education Ministry does its best because schools are funded based on their population. So we have to be resourceful ... that is the Jamaican way. Internet is a need. Just this week, we were instructed to go online because of the rain, but our teachers don’t even have access to Google Classroom. During the pandemic, they used to send the lessons via text message. We had Internet at one point, but it was just in the office. I have spoken to two persons in the community, and they have [a] connection through Digicel; that’s why I have reached out to them,” Harris shared.

Internet and other woes aside, Harris is looking forward to giving her students enrichment experiences because she doesn’t want them to “feel like they are less than anybody else”. There are plans to enter the Jamaica Cultural Development Commission’s annual showcase and expose the students through school trips and initiatives such as Koffee’s Haffi Mek It Tour.

“I really appreciate Koffee and her team putting Baxter’s Mountain on their list of schools to visit. It was so good. The students have not seen anything like this. There were so well behaved ... if anything, they were too well behaved. It wasn’t like at other schools where the students would be trying to get up close to Koffee and touch her. Instead, they were just singing along. But when it was time for them to show their talent, everybody was impressed. We have identified so many talents. There is one little boy who I didn’t even know could talk because he is so quiet. But when he went on that stage and deejayed, even Koffee and her team were saying that they needed a picture with this ‘big entertainer’,” Harris shared, laughing.

She said the tour had a lasting impact on her student. “I still hear them reminding each other to, ‘Be a friend, not a bully’, which is something they learned from the tour. We at Baxter’s Mountain Primary haffi mek it. There is no other way,” Harris declared.