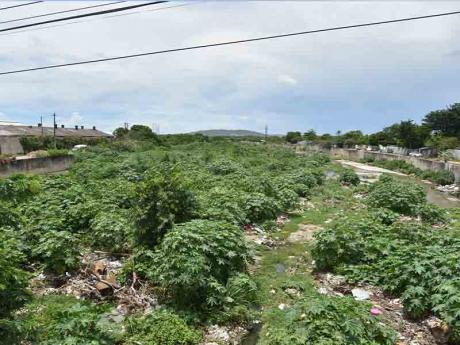 Hylton noted that the gully is a virtual forest as silt and debris have provided fertile ground for shrubs to become trees. - Kenyon Hemans photo

"A catastrophe waiting to happen" is how Member of Parliament for Western St Andrew Anthony Hylton has described the state of the Sandy Gully.

He said the gully poses a clear and present danger to residents of Seaview Gardens and Riverton Meadows, if the country experiences a storm.

Hylton noted that the gully near the Spanish Town Road bridge, in the vicinity of Seaview Gardens and Riverton Meadows, is a virtual forest as silt and debris have provided fertile ground for shrubs to become trees.

In his contribution to the State of the Constituency Debate in the House of Representatives on Tuesday, Hylton called on the Government to “act to save lives and property".

"We must avoid this impending catastrophe by doing what the minister of finance promised some three years ago. We must clean the Sandy Gully. Death knows no political colour. Death knows no social standing,” he said.

The senior opposition MP said that, at present, only small amounts of flood water can pass through the mountains of debris that have accumulated in the southern part of the Sandy Gully.

He said that the consistent rise in the water levels whenever it rains poses a serious threat to the communities of Riverton Meadows and Seaview Gardens.

“The gully floor and wall have been breached and we are only a hurricane or storm away from what I can only describe as a human catastrophe. The signs are clear for those who choose to see or to listen to the concern of the residents whose voices are merely echoing here today,” he said.

Hylton noted that the finance minister and other government members are aware of the concerns he has repeatedly highlighted.

He also pointed to the lack of desilting and dredging of three rivers that flow through his constituency which has led to continued flooding of the New Haven community.

He said the path for the Rio Cobre, Fresh Water and Duhaney rivers has been blocked by a tangle of debris and overgrown shrubs.

He stated that the rivers have not been dredged and desilted in the last 15 years.

“My heart bled recently when the mother of a five year old who was shot and killed while asleep in her bed said to me, 'MP if I didn't raise the bed out of the water in the room my daughter would still be alive today'.”