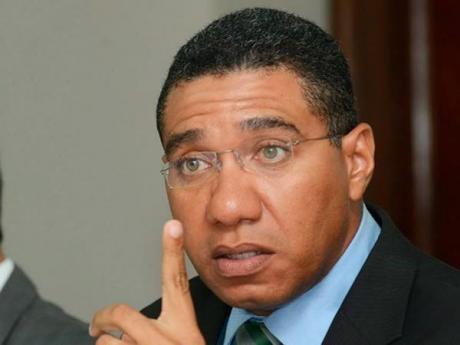 Holness said he was not surprised the "Opposition senators could not find it in themselves to support a measure that would save Jamaican lives." - File photo

Prime Minister Andrew Holness is questioning the parliamentary Opposition's commitment to Jamaica and to tackling crime following the Opposition's decision to block the extension of the states of emergency (SOEs) in the Senate on Friday.

"Do we have an opposition that really and truly has the interest of Jamaica at heart or is it the case that their interest is to see the crime monster get out of control for them to reap the political benefits?" Holness posed the question shortly after receiving what he described as "very disappointing news" of the vote.

Holness said he was not surprised the "Opposition senators could not find it in themselves to support a measure that would save Jamaican lives."

He asserted that the Opposition had made it very clear it would not back extension of the states of emergency, regardless of the changes made by the Government to the regulations which guide operations under the measures.

However, Holness said the Opposition's arguments against the SOEs are not valid.

"The state of emergency is constitutional and no court has ruled otherwise, therefore, the tool is lawful and it is effective. Nothing else should really matter other than those two critical points," the Prime Minister stated.

The Opposition has maintained that the way the Government is using the states of emergency is inconsistent with the Constitution.

They have also expressed concern about the powers given to the security forces by the SOE regulations and how the tribunals set up to hear complaints will operate.

The Government needed an affirmative vote from at least one opposition senator on Friday for the resolution for a 46-day extension of the SOEs to be approved.